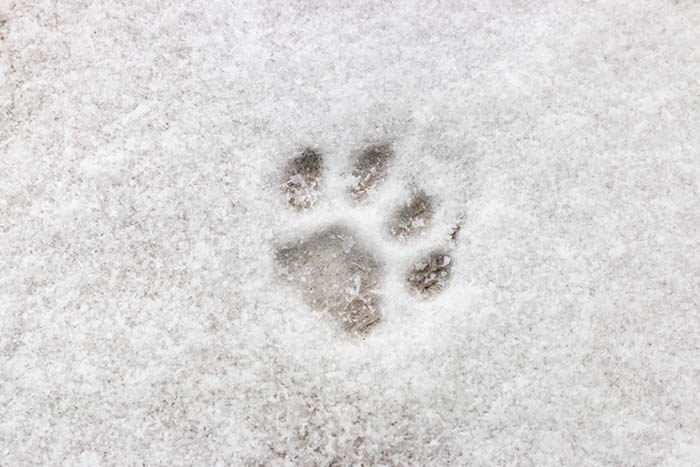 If you live in New England, you’ve probably noticed winter is no laughing matter. The roads get slippery, the cold freezes to the bone, heaters dry skin, blistery winds crack lips, and the salt on the sidewalks ruins jeans and shoes. Sure, the summer time heat is a pain in the you know where, but numb limbs and noses are equally annoying. We complain and complain about itchy sweaters and smelly scarves, but have you put any thought into dear, old Fido?

Friendly Fido loves his walks. So do we, but in the winter months taking out the leash doesn’t seem like such an enticing idea. Salt makes things a bit easier for humans: no slipping and sliding, no ice, no snow, no bruises, no weird-balancing acts. Your four-legged-pal doesn’t seem to mind either- why would he? It’s all slush, right? Think again, pal! Would you enjoy taking a walk on frozen H2O… barefoot? The stuff that melts the evil slippery substance from hell isn’t exactly purified sea salt (nothing ever is!). Believe it or not, there’s some really nasty, hazardous stuff in there, not to mention calcium chloride and sodium chloride. Regardless of whether or not it’s an ice melter or clusters of rock salt, anything used to liquify solid water in freezing temperatures is probably going to irritate sensitive paws. You can’t carry a broom wherever you go to sweep away whatever is preventing the floor from turning into a fun ride- that would be weird and arise suspicions concerning your sanity- but you CAN take simple and easy steps so your barking buddy doesn’t feel like he’s walking on broken glass (ouch!).

Need a bright idea? Before heading out for potty time or exercise, inspect your surroundings and choose a path that isn’t heavily salted, Fido will be grateful. In fact, ask around and see who’s using animal friendly products. Don’t forget to check tootsies for sores, cracks, or wounded areas. Ever spilled salt on an open wound (not a pleasant experience)? You should do this before and after stretching those legs, but don’t stop at boo-boos! Wet snow can cling to fur/hair, leaving ice stuck in weird places and a disgruntled pooch. Even worse, when slush mixes with chemicals, it creates yucky buildup – gah! Many times, when the melters make contact with H20, they result in a chemical reaction that releases hot, hot heat, therefore burning skin. Want a solution? Rinse those paw paws with warm water to get rid of outdoor winter muck (trimming the hair between toes and around legs probably helps too). Not only are you removing an irritant, but you’re preventing Fido (or Fifi) from later on licking and ingesting toxic chemicals, which can lead to mouth ulcers amongst other painful things. Remember to add hydrating your dog to the to-do list- you don’t want him to eat contaminated snow or take a sip from dirty puddles.

Finicky people do finicky things after jumping out of the shower. Slathering a coat of moisturizer is one of them. Cracked skin is no fun- for humans or for dogs. Applying a bit of Vaseline before going for a walk and after rinsing off excess salt probably feels heavenly. Adding trimmed nails to the paw-dicure should work wonders as well- long nails can force dogs to spread toes, allowing snow and salt to build up and create skin-havoc. Why stop at Fido’s version of a heavenly spa? Some of us don’t mind spending some extra cash to make our animal companions more comfortable. Although awkward at first, dog boots protect from tough weather and harsh chemicals. You can also buy animal-friendly ice melters that won’t harm your buddy’s paws. Who said winter had to be so bad? It only takes a little bit of patience and a lot of love to ensure you and your doggie friend can enjoy the paw-sitively purrfect winter wonderland.