All  Creatures Have the Right to Live Their Lives Free from Cruelty and Injustice.

As many of you know, the Companion Animal Protection Society has taken on an unusual case in Kansas. CAPS’ primary focus is fighting puppy and kitten mills, but the Kansas case involves sheep, goats, and rabbits. Many CAPS supporters have questions about this case, why CAPS took it, and why it has been difficult to save animals so clearly in need of help. Many of you may be wondering why it is difficult to save other animals, such as dogs clearly suffering in puppy mills. This article is my attempt to answer your questions. I’m Pete Paxton, CAPS’ lead investigator. I have done animal cruelty investigations for non-profits since 2001, investigating puppy mills, kitten mills, pet stores, greyhound racing trainers, factory farms, slaughterhouses, and commercial fishing boats. I authored Rescue Dogs, which largely describes my work for CAPS, for whom I have worked since 2003, investigating hundreds of puppy mills and pet stores. From this experience, I can not only predict what crimes will occur at different animal facilities but the difficulties in saving victimized animals.

In May of 2021, while documenting a puppy mill in Miltonvale, Kansas, I came across severely neglected livestock, under the care of Kevin Vesterberg, on neighboring land owned by his father, Virgil. Due to the extraordinarily dire circumstances the animals were in, I contacted law enforcement right away. I asked CAPS Founder and President Deborah Howard if she wanted a case involving animals different from who CAPS normally helps. Deborah immediately agreed, knowing that CAPS Kansas Director Debbie Miller would be able to help out locally. Of course, despite the life-threatening chronic abuse the animals were suffering at the Vesterberg property, the animals have not been saved. It took four days for the prosecutor to agree to look at CAPS’ evidence. It took five days for a veterinarian to agree to look at the animals, and when he finally did, he refused to shake my hand or talk to me. The sheriff’s department refused to seize the animals in need of care.

Many CAPS supporters know how predictable criminal activity and government apathy relate to puppy mills and could relate to the Vesterberg case. However, we must also understand the cultural biases creating animal cruelty, which are the root of not only the puppy mill problem but all commercial animal abuse. As CAPS supporters, we fight against cultural bias and misinformation so we can promote a pro-adoption message. We understand that breeders, as well as puppy and kitten purchasers, are often good people who are doing something acceptable to their communities and families. We try to get them to question themselves, so they can question a system that ultimately kills companion animals. However, we often find that people refuse our message of adoption, and that the justice system refuses to use its ability to save animals in need. To explain this, I will compare the Vesterberg evidence to that of another CAPS case I worked in New York Mills, Minnesota in 2008: The Kathy Bauck case.

Bauck ran Pick of the Litter Kennels in New York Mills, Minnesota, with around 900 breeding dogs and usually around 400 puppies, selling to customers across the US. By the time I ended up working undercover at her kennel in 2008, she had been convicted for performing illegal surgeries on her own dogs. While I was undercover, Kathy was spending her nights in jail, only to go back to the kennel on work release during the day, where I documented her abusing dogs so badly it led to numerous deaths. After she was convicted of the new charges arising from my investigation, the judge still allowed her to keep her dogs. In fact, during her trail, her husband was selling dogs at an Amish auction in Ohio. Only after USDA permanently revoked her license, with evidence from CAPS showing that she was still selling to pet shops with a terminated license, was Bauck required to greatly reduce the number of dogs she could keep, which prevented her from staying in business.

In the Vesterberg case, I found baby animals decomposing on the bodies of older, even more decomposed animals. Sheep had overgrown hooves up to a foot long, were emaciated, and one had a bloody prolapse. Rabbits were living on inches of manure piled up in small cages, with one having an eye infection that left yellow ooze seeping down the animal’s face. No animal abuse case could be more apparent in showing the animals must immediately be taken from their abuser. However, law enforcement refused to seize the animals to give them to sanctuaries we had already lined up. CAPS explained the cost of rescue would be fully covered, requiring no Kansas taxpayer money. Still, they refused.

In both of these cases, the animals are livestock. At Pick of the Litter Kennels, despite its name, I was asked why I called the facility a “kennel” when other workers called it a “farm.” They saw the dogs as livestock serving an agricultural purpose. They were treated as such, being abused and neglected like I commonly see on factory farms for hogs, chickens, and cattle. But that cultural bias of seeing livestock as “less than pets” also means that the justice system can view breeding dogs the same as Vesterberg’s neglected sheep and goats, and are less likely to enforce cruelty statutes. Most people wouldn’t kick their dog if she won’t stop sniffing the grass while on a walk. But if a hog won’t move into her gestation crate, she is absolutely kicked. Hog farm workers often have numerous animals to move, and the frustration of one holding up the workday routinely makes workers resort to violence. At Bauck’s puppy mill, dogs wouldn’t cooperate while being moved, workers would drag them by their necks with leashes and slap them in their faces if they tried to bite. The dogs were holding up the workday.

Imagine being raised in a community where such acts are considered normal. Imagine being reprimanded if you try to stand up for the animals, even dogs. The social norms that come from this kind of culture can create expectations among even law enforcement that livestock, including breeding dogs, are exempt from normal cruelty considerations. Someone such as CAPS trying to say otherwise is seen as an attack on local culture instead of an assistance in enforcing the law.

Of course, judging people who are different from us only solidifies them in their beliefs. It may make us feel better for having the moral high ground but changes nothing. Instead, we have to learn how to communicate with others, such as people who refuse to adopt, so they understand our respect for animals. This can’t happen unless we understand them, and to do this we have to go deeper than the view of dogs as livestock and see a cultural belief that creates not only social but legal barriers to protecting animals. In a single word, this belief is “teleology.”

Teleology is a way of viewing things by the perceived purpose they have, rather than by the causes that made them occur. For example, I point out in Rescue Dogs that most puppy millers live in areas where factory farms are common. This has led to many farmers looking for the animal they can put the largest number of into the smallest amount of space, while charging the highest price per animal. Thus, puppy mills proliferate. The teleological thinker, however, would say, “No, they proliferate because those dogs’ purpose is to be bred.” Teleological thinkers believe fish are in the ocean so we can harvest them, chickens exist so we can eat them, and dogs exist so we can breed them, race them, and fight them. Science has found no purpose inherent in animals. Instead, through culture, we have created those purposes. Instead of realizing we altered the evolution of animals to suit our needs, in a manner against animals’ physical and psychological well-being, teleology claims that was the purpose meant for those animals all along. 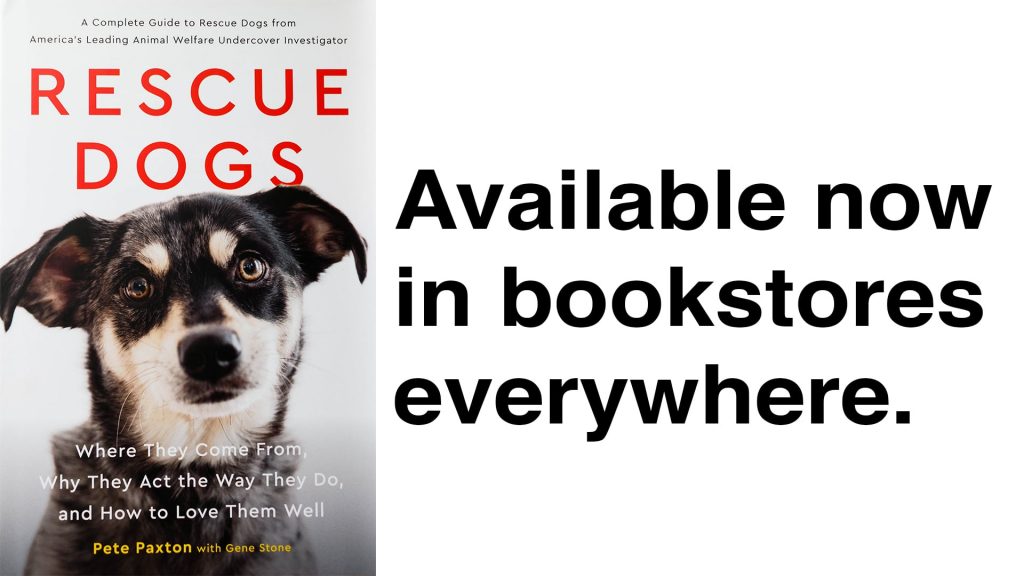 With this in mind, we can see how we have created exemptions for cruelty statutes to suit factory farms. For example, mutilating your pet with no anesthetic would be illegal. Still, there’s exemptions to cruelty laws for mutilating farm animals, including puppies, without anesthetic. Farmers can castrate piglets and cut off their tails, and dog breeders can cut off the tips of ears and tails of puppies to look more “breed specific.” Thus, instead of extending our compassion, we use the law to limit our compassion to fit our interests. Likewise, when CAPS and other animal protection groups documented too many violations of the USDA’s Animal Welfare Act for dogs with matted fur and rotting teeth, the USDA changed their regulations so that bad fur and teeth no longer counted as violations. There’s something to be said for the fact that the United States Department of Agriculture licenses dog breeding kennels. The same agency that inspects slaughterhouses inspects puppy mills. To them, all animals are a resource to be used for people. Our laws reflect our culture. The end result is that animal abusers such as Bauck and Vesterberg are often allowed to keep their animals, who are seen as a resource instead of victims.

But it is possible to bridge the gap between our traditions and the innovations we need for extending our compassion. That bridge is science, through which we know that the animals we use for food, clothing, and “pet” breeding can all suffer. We also know that they try to avoid suffering. People who keep chickens, goats, or pigs as companion animals  know those animals are quite loving and have distinct personalities and quirks. To those people, the broiler farm for chickens is the same as the puppy mill for dogs. To the animals, it is the same as well. But for many people there is a distinct difference, created by our biases and our belief that animals exist for our purposes. CAPS supporters realize that the ultimate way to end puppy mills is to promote adoption. Likewise, the ultimate way to end factory farming is to have a plant-based diet.

Whether this article has solidified you in your beliefs, challenged you to do more research, or felt provocative to you, I hope you can understand why CAPS took the Vesterberg case and fought for the animals that need us. While our mission is dedicated to animals suffering in the pet shop and puppy/kitten mill industry, CAPS believes that all creatures have the right to live their lives free from cruelty and injustice. That is the purpose we have given ourselves. Thank you for joining us.