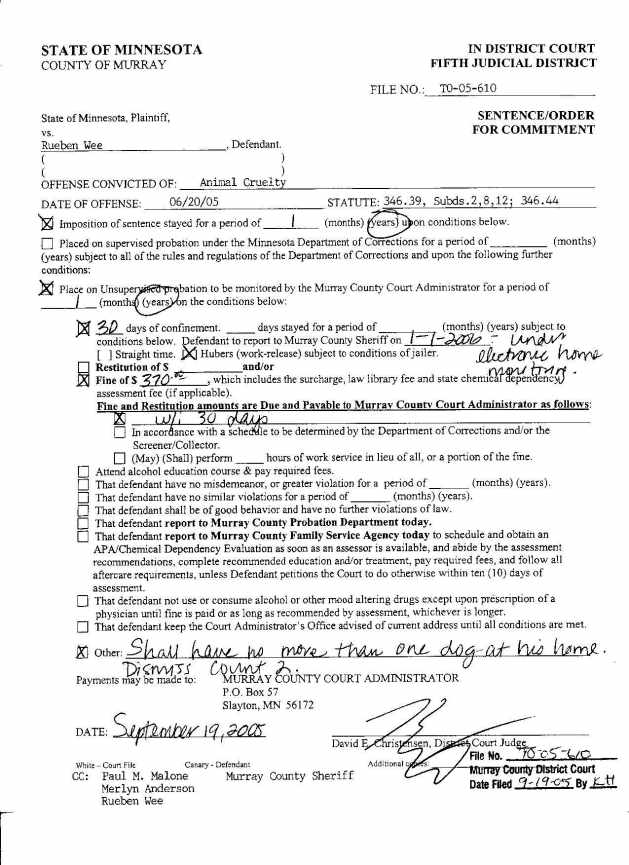 There were about 38 dogs and 12 puppies on the property at the time of investigation. The physical layout of Wee’s property was the same as described in previous CAPS reports

The Pomeranian/Miniature Pinscher pens each contained about five dogs. These pens had a single plastic dog house that was about two feet wide and tall and three feet long. The dog houses were not of sufficient size to house all of the dogs in their pens at once (3.43.21 Subd. 2-Shelter) (343.40 Subd. 2-Building specifications) and allow the dogs to lie in a normal manner or turn about freely (3.46.39 Subd. 4-Shelter size). All of the dog houses lacked windbreaks (343.40 Subd. 2-Building specifications). There was no shade other than the insufficient housing (3.43.40 Subd. 3-Shade) (3.46.39-Subd. 4-Shelter size).

A pen with a Bullmastiff and a Boxer had an outdoor enclosure connected to a wooden barn that was on the southwestern end of the kennel. The Bullmastiff’s front right leg had several bleeding sores on its ankle, which was swollen to over twice its normal size (343.21 Subd. 1- Torture) (3.43.21 Subd. 7-Cruelty). In another pen, a non-whelping Boxer’s nipple was swollen to over 10 times the size of its other nipples (343.21 Subd. 1-Torture) (3.43.21 Subd. 7-Cruelty).

Whelping Building
With the exception of heat lamps for some puppies, the whelping building had no heating or air conditioning (3.46.39 Subd. 7-Temperature). Proper ventilation was not present, especially considering the large accumulation of feces (3.46.39 Sub. 8-Ventilation). An unheated shelter must provide shelter and bedding as prescribed by 343.40, yet there were no shelters inside the whelping building that satisfied this requirement (3.43.40 Subd. 2-Building specifications)

The younger puppies were on a flooring of wood chips and shredded paper with week’s worth of feces mixed into it (3.43.40 Subd. 2-Building specifications) (3.46.39 Subd. 12-Sanitation).

The adult Boxer was in a pen about three feet wide and four feet long. The pen had a heat lamp shining down into one corner, indicating nursing puppies were in the pen. A pen on the north end of the whelping building had a nursing Boxer mother with a heat lamp set about three feet above the ground. At least one Boxer puppy was visible beneath the light.

The middle aisle of the building had a dirty metal desk and rusting metal chair sitting in it. Several bottles of exposed medicine were sitting on top of a cover over one of the pens (3.43.21 Subd. 1-Torture).

The only light source in the pen at the time of investigation, other than the heat lamps noted above, was through the windows of the building (346.39 Subd. 9-Lighting). This was insufficient light to clearly see inside the building beyond what is noted above.

The southeast end of Wee’s yard contained an area of uncut grass just east of two trash piles. The grass had a wooden board about 2.5 feet wide and four feet long. Under this board was what appeared to be two Pomeranian carcasses and a dog skull (35.82 Subd. 2-Disposition of carcasses) (343.21 Subd. 1-Torture). Flies were swarming around the bodies.

Mr. Wee told the CAPS investigator on 6/15/05 that he sells puppies to Patti Noethe (42-B-0078) in Britt, Iowa. Mr. Wee said he claims the dogs belong to his son and daughter even though the dogs live on his property and are in his care. Effectively, he is selling his dogs to a broker through his children. Mr. Wee states on paperwork that his children own the dogs at his facility. The children are thus exempt from licensing because they have supposedly fewer than four breeding females.