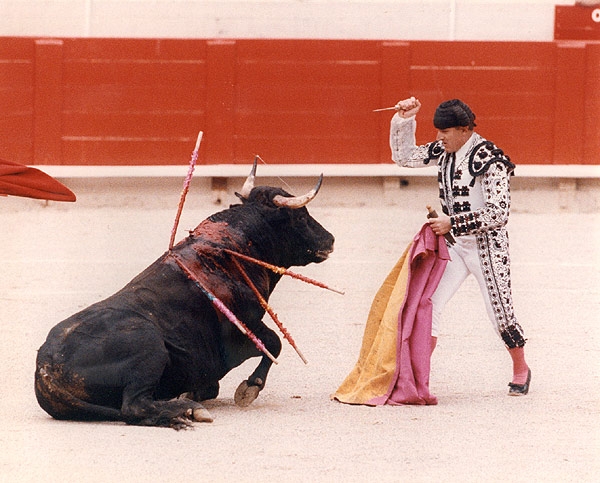 NEW YORK — The Americans are coming. For the first time ever, American animal protection organizations are heading to France to stop a massacre of bulls on October 27.

Friends of Animals (FoA) and Companion Animal Protection Society (CAPS) will join forces with over 1,000 animal rights activists at a bullfighting arena in Rodilhan, a small village in the south of France. A US delegation is flying to France to support Comité Radicalement Anticorrida (CRAC Europe), the French anti-bullfighting organization. The last time the bullfight was held in Rodilhan, activists were brutalized by bullfighting enthusiasts. Rodilhan’s mayor was filmed assisting in the assault of peaceful demonstrators.

“They need our help,” says Carole Raphaelle Davis, CAPS’ West Coast director and director of European campaigns for FoA. “Not only are they stabbing animals to death but police stand by while ‘afficionados’ beat up peaceful animal rights demonstrators who are there to stop a massacre. We are coming to march with CRAC Europe against this horrific animal abuse.”

Forty California school children have sent letters to the mayor of Rodilhan and the French ambassador in Washington, D.C. pleading them to “cancel the killing.” CAPS and FoA have also launched an American campaign aimed at headquarters of the French tourist board in New York City and French embassy in Washington, D.C. to threaten a boycott of travel to France. France is the number one destination for US tourists with 3 million Americans traveling there every year. Calls and emails have been pouring into both offices.

“Nowhere on the French Tourism website is there any mention of the cruel blood sport of bullfighting,” says Davis. “The French tourism board is obviously hiding this from US travelers. When Americans find out about it, they will be horrified. American’s won’t understand how this can be legal under a special judicial exemption in such a civilized country. US travelers want to see Mona Lisa’s smile and the Eiffel Tower, not gruesome animal abuse.”

On Sunday, October the 27th, matadors and their assistants will taunt and kill a series of bulls and calves throughout the day in Rodilhan’s bullfighting arena. The chief of police of Nîmes, the town that has jurisdiction over the village of Rodilhan, has stated that police will arrest any protesters who cross a police barricade 400 meters from the arena and face a fine of 76,000 euros.

The bullfighting “aficionados” are using social media sites to threaten violence against animal rights demonstrators. The protesters will be tweeting LIVE from Rodilhan using the hashtag #Rodilhanmassacre.

“To call the sadistic performance of French matadors who inflict pain and death on confined, weakened bulls and calves a cultural event is mind-blowing to humanitarians in the United States,” said Edita Birnkrant, NY director for FoA.

“France shouldn’t benefit from tourists who travel to enjoy a more refined, civilized culture,” said Birnkrant, “and my presence at this protest in France represents millions more Americans who will refuse tourism to France until this animal torture grotesquely labeled as ‘art’ is officially banned.”