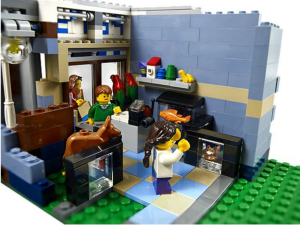 At CAPS, we are all in for the true meaning of the holidays: love, compassion, and caring. The problem with the LEGOLAND® Pet Shop – and we are also up for a bit of fun and gift giving – is that it normalizes children’s societal perceptions and expectations.

Giving a kid a model of a shop that sells companion animals leads children to believe that it’s normal and proper to buy and sell creatures in the same manner as commodities. What children are too young to realize is that almost all the puppies and kittens bought and sold in pet shops come from puppy and kitten mills (as CAPS demonstrated in its New York City Retail Pet Store ordinance testimony). These cruel facilities breed animals on an industrial scale in the inhumane conditions that routinely cause health and behavioral problems.

Truth in LEGOLAND® advertising – there are no “pampered pets” for sale in pet shops. All animals deserve better.

At CAPS, we say that building a model of a pet shop that sells animals is wrong. No, we do not scream out against LEGOLAND®, a charming company from Denmark where sex with companion animals is actually legal (really!) or take off our clothes in the manner of other animal organizations, but we do ask that parents consider purchasing some other present for their children AND call LEGOLAND® at 1-800-835-438, follow the link at http://service.lego.com/en-us/contactus/contact-us-email/, or send a snail mail to:

Politely request that LEGOLAND® discontinue the Pet Shop model and replace it with a much more fun Pet Adoption Center which will spread a message of love, compassion, and holiday cheer and eliminate the ugly puppy and kitten mill supply chain from LEGOLAND®. We want to promote the importance of adopting homeless animals, not oppression and cruelty, for the Holiday Season.

***The LEGOLAND® ordinance is a parody of real life pet store issues where many companion animals suffer.***

A CAPS investigation of LEGOLAND® Pet Shop revealed that the puppies and kittens came from inhumane commercial breeding facilities, commonly referred to as puppy and kitten mills, and

A CAPS investigation of the mills supplying LEGOLAND® Pet Shop uncovered the following: (1) sanitation problems leading to infectious disease; (2) large numbers of animals overcrowded in cages; (3) lack of proper veterinary care for severe illnesses and injuries; (4) lack of protection from harsh weather conditions; and (5) lack of adequate food and water.

LEGOLAND® finds that the influx into its shelter system of companion animals originally sold by retail pet stores imposes an unfair, disproportionate, and unnecessary burden on the municipality in terms of cost and that the best interests of the LEGOLAND® would be served by reducing that cost through a ban on the retail sales of companion animals within LEGOLAND®.

LEGOLAND® believes that eliminating the retail sale of companion animals in pet stores in the city will promote community awareness of animal welfare and, in turn, will foster a more humane environment in the municipality.

LEGOLAND® enacts this ordinance pursuant to the authority vested in LEGOLAND® by the LEGOLAND® Constitution allowing a municipality to make and enforce within its limits all local, police, sanitary, and other ordinances and regulations not in conflict with general laws.

Retail Sale of Dogs and Cats

a. Prohibition. No pet store shall display, sell, deliver, offer for sale, barter, auction, give away, or otherwise transfer or dispose of companion animals, including dogs or cats, in LEGOLAND® on or after December 24, 2015.

c. Adoption of Shelter and Rescue Animals. Nothing in this chapter shall prevent a pet store or its owner, operator, or employees from providing space and appropriate care for animals owned by a publicly operated animal control agency, nonprofit humane society, or nonprofit animal rescue agency and maintained at the pet store for the purpose of adopting those animals to the public.