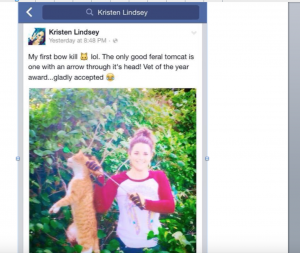 A Texas veterinarian who posted a picture of herself on Facebook bragging about killing a cat with a bow and arrow, is facing criminal charges for animal cruelty. Austin County Sheriff’s office, animal control and the State Board of Veterinary Examiners have all opened investigations today for animal cruelty against the veterinarian. Since the photo of Kristen Lindsey was posted at 8:48 p.m. Wednesday night, the Washington Animal Clinic in Brenham, Texas, where she was employed received over 500 complaints. The clinic’s website was so inundated with Internet traffic, its site crashed early Friday. The clinic has since fired her, and her name on the sign outside has been covered up with duct tape according to KBTX.com.

“Our goal now is to go on and try to fix our black eye and hope that people are reasonable and understand that those actions don’t anyway portray what we’re for here at Washington Animal Clinic,” said Dr. Bruce Buenger. “We put our heart and soul into this place.”

The pet cat that Kristen Lindsey killed was not a feral cat. A local rescue organization claims that Tiger, a 6-year-old orange Tabby, belonged to an elderly couple.Tiger went missing Wednesday.

The photo was taken by someone other than Dr. Lindsey, which means that at least one other person is complicit in the crime. The graphic photo shows Dr. Lindsey smiling and holding Tiger up in the air, an arrow through his head, with the caption, “My first bow kill, lol. The only good feral tomcat is one with an arrow through it’s head! Vet of the year award gladly accepted.”

“Any veterinarian guilty of such a depraved, violent act towards a cat should have their veterinary license revoked immediately and there should be criminal charges, said Edita Birnkrant, campaigns director of Friends of Animals, a national animal protection organization. “What cat owner, or anyone with any species of pet would trust them to the care of such a lunatic? She should never be allowed to work as a vet again, anywhere,” she said, in a telephone interview Friday.

On Friday morning, the Companion Animal Protection Society filed a complaint with the Texas Board of Veterinary Medical Examiners Association urging an emergency suspension of Dr. Lindsey, stating that she is “sociopathic” and “clearly a danger to animals.”

“This veterinarian posted a picture of herself on social media, smiling, while holding up a dead cat with an arrow through its head. She bragged that she had killed the cat and compounded her crime against this animal by showing a sociopathic attitude, making a joke about it. In her post on social media, she went so far as to use the emoticon, “crying laughing.”As this act is of a criminal nature, one of extreme cruelty, causing suffering and death, we ask for an emergency suspension of this veterinarian. Ms. Lindsey is clearly a danger to animals. In addition, we ask that you do everything necessary to ensure that the findings of your open investigation are shared with all national veterinary oversight committees.We are also filing a complaint with the police department and expect Ms. Lindsey to be prosecuted for animal cruelty. Empathy-challenged people like Ms. Lindsey should be kept far away from animals and she should not be licensed to work with animals in any state.”~ Companion Animal Protection Society

An employee of the Texas Board of Veterinary Medical Examiners Association who is not authorized to speak about this open investigation told me that Dr. Lindsey will be brought in to answer to the board and complainants and that she faces having her license revoked. This would not prevent her from seeking employment as a veterinarian in other states. With how the Internet has been lit on fire by the photo of Dr. Lindsey’s abject cruelty to animals, it is unlikely she will be offered work in veterinary care anywhere.

UPDATE April 21: The police investigation is completed and findings of the investigation have been turned over to the Austin County District attorney under Texas Penal Code 42.092.

Author Bio: Carole Raphaelle Davis is the West Coast Director of the Companion Animal Protection Society (www-caps-web.org), a national, non-profit organization that specializes in investigations of pet factories and puppy mills. Ms. Davis is the author of “The Diary of Jinky, Dog of a Hollywood Wife” published by Andrews McMeel. Her articles about dogs have been published in American Dog Magazine, Fido Friendly, Paw Print and Fetch.com. She is a frequent CNN comentator on the subject of animal rights. Contact Carole at Hollywoodjinky@gmail.com