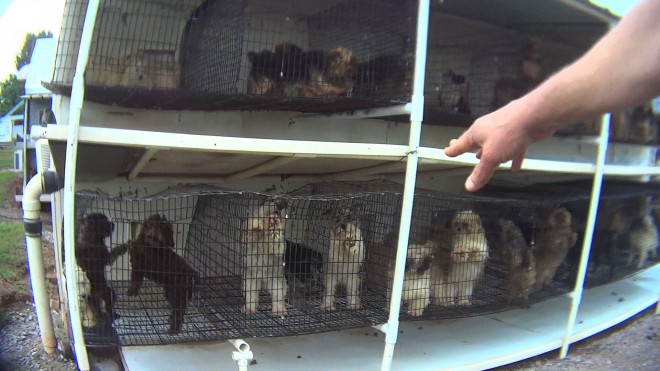 In Massachusetts, there are ten pet shops that sell puppies and kittens. That number may seem small, but collectively they sell thousands of animals per year, putting big money into the bank accounts of puppy mills. Most of these pet shops, when questioned about the origins of their dogs, give misleading or dishonest answers. But CAPS wanted to uncover the truth, so our investigators went in.

CAPS investigated three of the shops in Massachusetts: Pet Express in Braintree; Fin, Fur & Feather in Hanover; and Park Avenue Bird & Pet Supply in West Bridgewater. We also investigated the breeding facilities that supply these shops with animals. Here is a video of what we found:

As you can see, all three of these pet shops have obtained dogs from USDA-licensed puppy mills. Many of those mills have landed on the Humane Society of the United States’ annual list of the nation’s worst breeding facilities. Included on that list (twice) was notorious puppy mill breeder Gary Felts. He was a big supplier of puppies to these Massachusetts pet shops until he finally had his USDA license terminated thanks to a recent collaboration between CAPS and federal officials.

MassLive, the second largest online news site in Massachusetts, just released an investigative article about another pet shop in the state: The Puppy Place in West Springfield, which also sells puppy mill animals. CAPS provided MassLive with extensive evidence and undercover video footage for the article, which details dozens of complaints and horror stories from customers who purchased sick puppies at The Puppy Place. You can read the full article here.

As for the rest of Massachusetts’ pet shops, CAPS also traced many of their dogs to horrendous mill breeders—including Starmye Halpain, Dwayne Hurliman, and Kathy Bauck. All of these breeders violated the Animal Welfare Act at their facilities. Their dogs lived in tiny cages, exposed to the elements and denied proper veterinary care. Dwayne Hurliman had over 1,000 dogs at his breeding facility, and Kathy Bauck was found guilty of animal cruelty after a CAPS investigation. These mills were, and in many cases still are, the worst of the worst.

This is why Bill S.470, a piece of legislation being considered by the Massachusetts State Senate, is so vital. If the bill passes and becomes law, the sale of dogs and cats in pet shops will become illegal in Massachusetts. That means these puppy mill breeders, and hundreds more like them, will no longer have a retail market for their dogs and cats in the state. Instead, pet shops will be encouraged to offer dogs and cats for adoption from local animal shelters and rescues.

In support of Bill S.470, CAPS has been meeting with legislators, preparing evidence from our investigations, and presenting testimony to the Senate. But we also need your help! If you live in Massachusetts, please call or email your legislators now to let them know you support Bill S.470. Ask them to support the bill, too.

You can go here to find your legislator: https://malegislature.gov/Search/FindMyLegislator

Now is the time to act. In California, the state just made history by banning the retail sale of dogs and cats. It was the first state ever to do so. If Massachusetts joins them, it will remove another key and profitable market from the puppy mill industry’s grasp. That is exactly the kind of pressure needed to put puppy mills out of business for good.

On behalf of the voiceless dogs and cats suffering in mills, we thank you for your help.