The temperature at the time of the investigation was 18 degrees Fahrenheit and windy.

Building Type #1:
When I went to Amos Slabaugh’s house at around 3:30pm, his wife was the only one home. There was a dilapidated barn next to the house and two adult goats with very young, baby goats outside. It was about 18 degrees Fahrenheit with a -5 Fahrenheit windchill. Ms. Slabaugh said Mr. Slabaugh wasn’t available but would be the next day. When we came back, one of the baby goats was dead, frozen in the front yard (2.131(b)(1)-Handling of Animals) (2.131(e)-Handling of Animals) (3.1(f)-Housing facilities, general). Next to the goat was another unidentified, deceased animal that had decomposed to fur and bones. As I walked over to look at the other goats, I tripped over a large jaw bone of another unidentified animal. The previous day, there were two big dogs, a Great Pyrenees, and a large black and white dog. The latter wasn’t there when we returned.

Building Type #2:
Next to the barn was a red building with broken windows. Inside were four large chickens without a nest, nesting material or rooster- only old, broken chairs. They couldn’t get out because the door was shut. They were too big to get out through the windows. They had no food or water. (3.129(b)-Feeding)

The cages were about 3 feet off the ground, approximately 3 feet long by 3 feet wide, and held one to two adult dogs. One cage held five puppies.The cages were sagging in the middle (3.6(a)(2)-Primary enclosure). The older dogs stood on metal bottoms (3.6(x)-Primary enclosure). None of the cages had bedding (3.2(a)-Indoor housing facility). The first cage had six puppies on a wire bottom (3.6(x)-Primary enclosure). It had a swatch of carpet about 1 foot square for all six puppies to lie on. The carpet was full of feces (3.1(c)(3)-Housing facilities, general) (3.11(b)(4)-Cleaning, sanitization, housekeeping, and pest control). The puppies, all Yorkiepoos, had dried feces stuck to their fur (2.40(b)(2)-Attending veterinarian and adequate veterinary care). There was an adult, female Poodle next to the puppies with runny eyes and bad teeth (2.40(a)(1)-Attending veterinarian and adequate veterinary care).

The dogs on the right side of the first room did not have access to the outside. The cages on the left side of the room had no access to the outside either and all had nursing mothers. The puppies were in box-like areas at the back of the cages. All the cages with nursing mothers had square holes cut in the back and were affixed with some kind of wire to the “whelping boxes,” leaving exposed, sharp edges (3.6(a)(2)(i) &(ii) & (ix) Primary enclosure). There were plastic runners under the cages to catch the urine and feces which had accumulated (3.1(f)-Housing facilities, general). The cages were also full of feces (3.11(a)-Cleaning, sensitization, housekeeping, and pest control). The feeders were attached to the cages with wire and some were hanging from one side. They were dirty both outside and inside (3.9(a) & (b)-Feeding) (3.11(b) (2)-Cleaning, sanitization, housekeeping, and pest control). There was very little food in many of the feeders. The water dishes were sitting on the cage bottoms, some had no water at all (3.10-Watering).

To get to the other room you had to turn sideways to get past the giant, extremely hot wood-burning heater. There were more dogs in the other room. There was a Pug with an advanced case of cataracts and a Lhasa that also had cataracts (2.40(a)(1) & (b)(2)-Attending veterinarian and adequate veterinary care). Many of the females were old. In this room, the dogs located on the left side had no access to the outside. The cages were covered with feces inside and underneath (3.11(a)-Cleaning, sanitization, housekeeping, and pest control). Most had no water or bowls (3.10-Watering).

The cages outside the barn were covered with feces and had piles at least 1 foot high underneath (3.11 (a)-Cleaning, sanitization, housekeeping, and pest control). These cages were approximately 3 feet long by 3 feet wide and 3 feet off the ground. They had a roof and were blocked on one side by the barn itself but had nothing else to keep out the wind, rain, and snow. 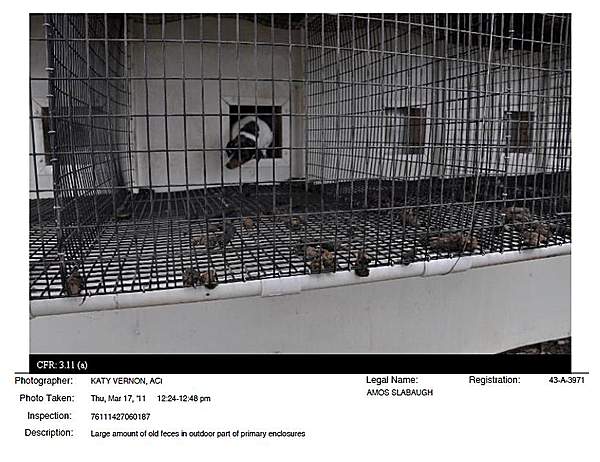 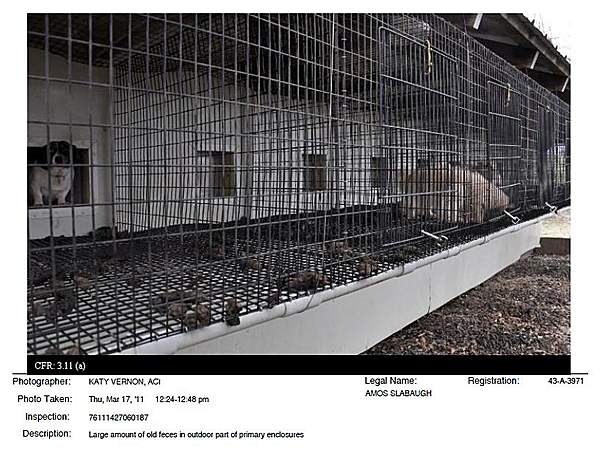 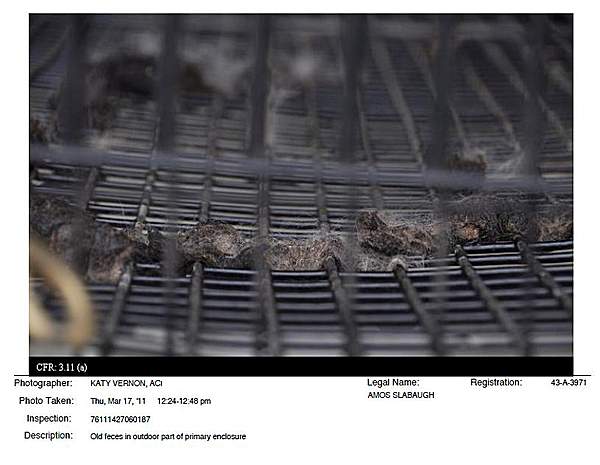 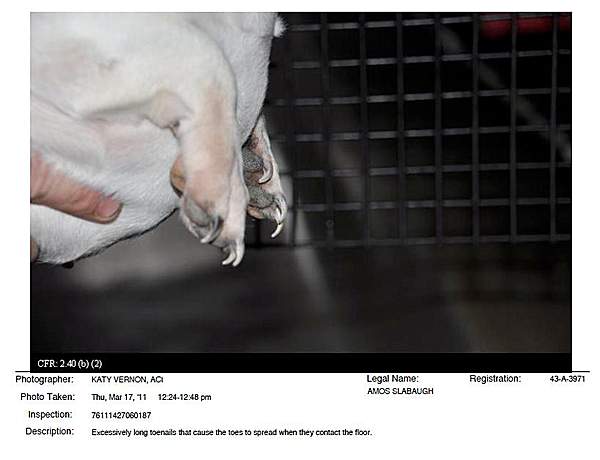 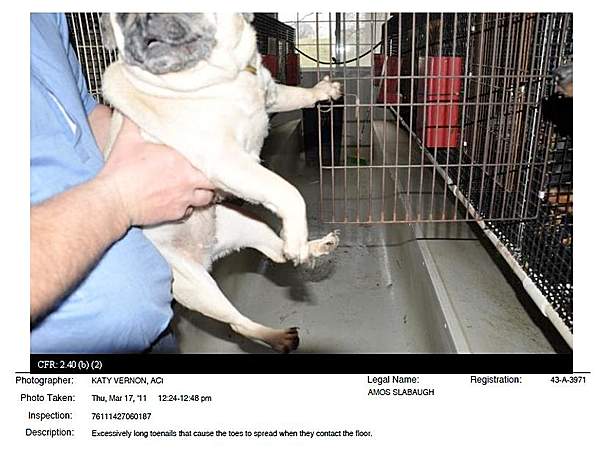 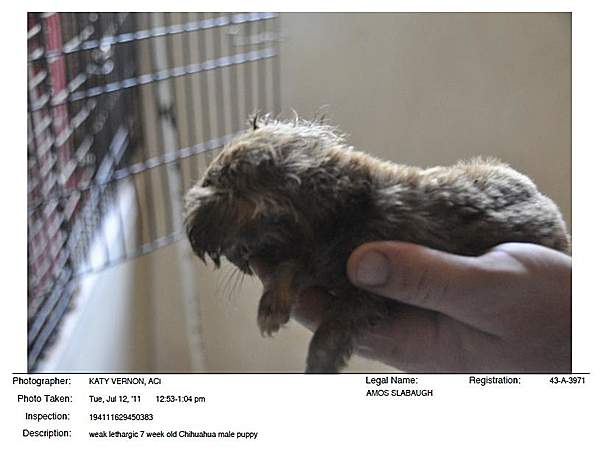 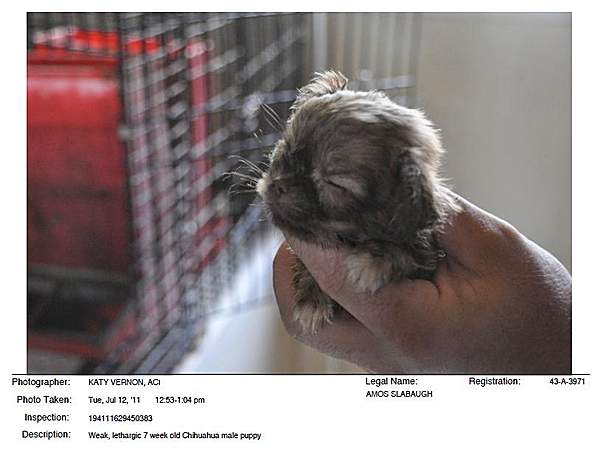 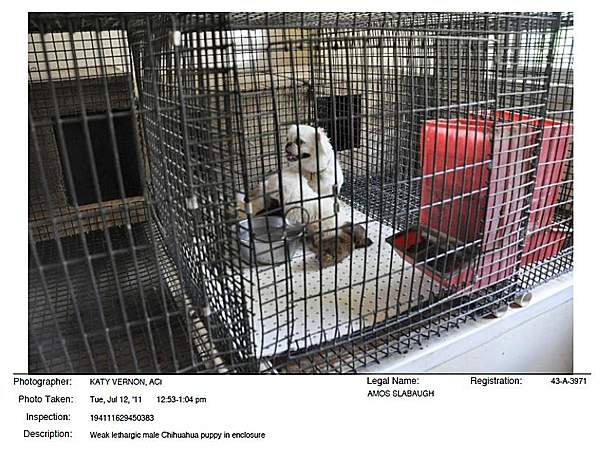 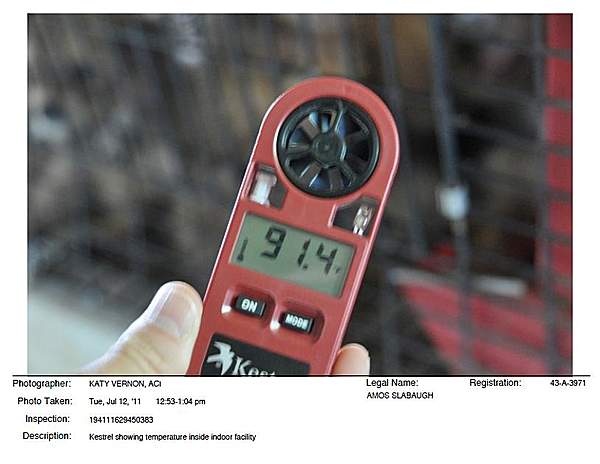 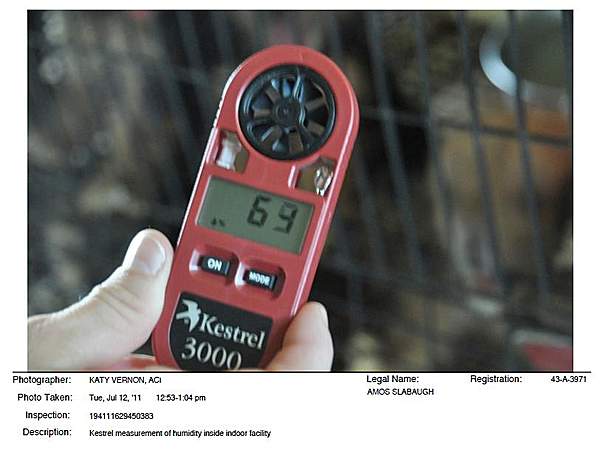 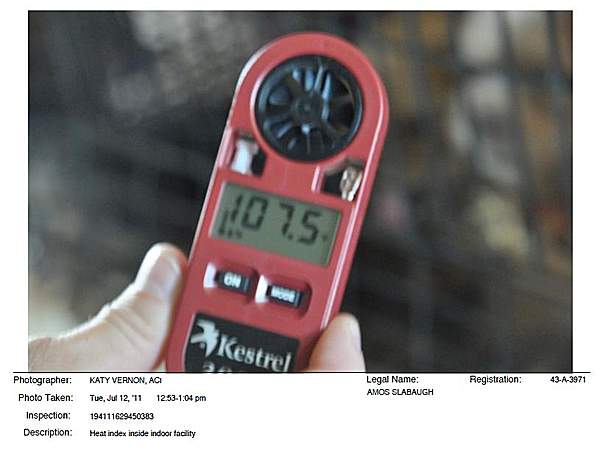 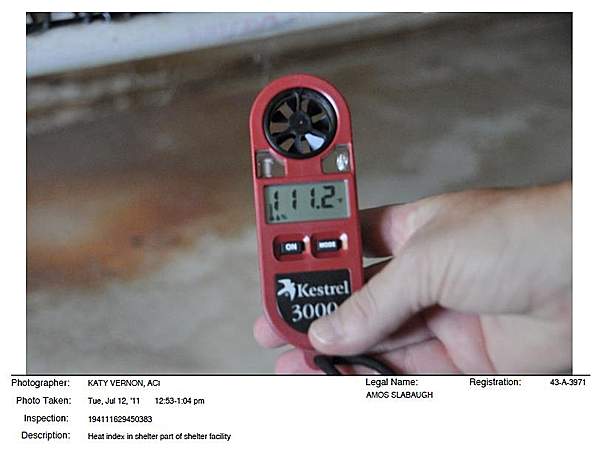 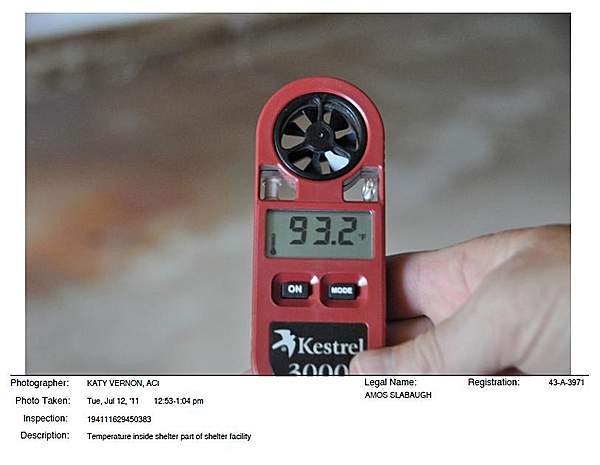 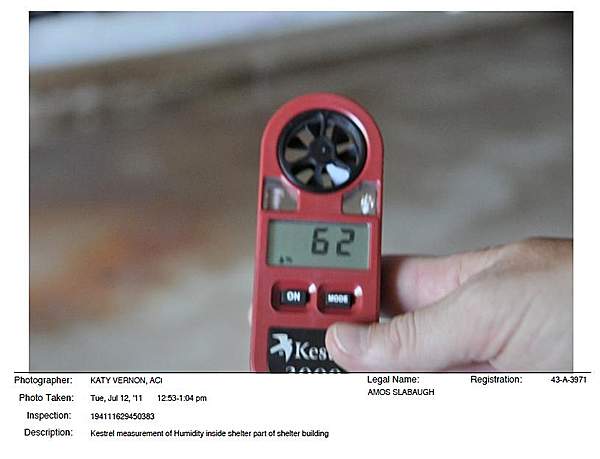