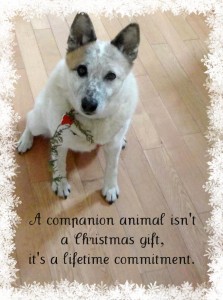 Cute puppies are in high demand throughout the holidays. During a time when everyone is searching for the perfect gift, people often forget that the cute Labrador with a giant red bow is NOT a toy but a living and breathing being. Unfortunately, many individuals will act on impulse, fall victims to the season’s shopping craze, and buy the puppy in the pet shop window. Here are six compelling reasons not to fall for the trap:

1 – Inhumane Conditions
Every day, pet shops sell the image of happy puppies from happy homes – it’s all a front. The majority of pet shops get their dogs from puppy mills – commercial mass-breeding facilities. Shoddy construction and poor kennel conditions seem like an industry standard, with some facilities in such bad shape that they fail lenient USDA inspections. Even those licensed and regularly inspected are a far cry from a humane environment. The cages are often small and overcrowded, at times with numerous puppies crammed in approximately 10 square feet of space. In places like the Midwest, kennels are often outdoors and exposed to the elements, claiming the lives of puppies that either freeze in frigid winters or die overheated in the summer.

2 – Cruel Treatment
Pet shops market their businesses as stores that get their puppies from high quality places that devote their time and money into giving the best care possible. That couldn’t be further from the truth. A disturbing number of active breeders have been either investigated or prosecuted for animal cruelty. There are documented cases of breeders killing sick dogs instead of treating them or taking them to a veterinarian. Pups might go for days without food or water, surviving on scraps. Another industry trend is practicing veterinary medicine without a license, including performing butchered caesarean sections that often kill mothers and pups. Reputable vets refuse to work for puppy mills.

3 – Profit Focused
Dead puppies are tossed like garbage and considered “acceptable losses” by mass breeders. Whenever you see an expensive pure breed in a pet shop, the price includes the death of countless other pups that succumbed at birth, at the kennels, or during transportation. Crumbling facilities, underpaid handlers, and cheap transportation are just a few ways in which puppy mills save money to maximize profits. They also skim on vet care, failing to screen for common preventable diseases and genetic disorders that could later cost unsuspecting consumers thousands of dollars. Female dogs are forced to have puppies until their bodies give up – making breeders rich with each litter.

4 – Unsocialized and Unhealthy Puppies
Puppy mill dogs are more likely than other dogs to have a host of behavioral and physical problems. These puppies barely survive the harsh environment they are born in and are given little time to recover and socialize before they’re marketed in stores. Many puppies are so unhealthy, they often die during their first year with a new family. It is common for a puppy mill dog to develop problems after purchase because pet shops use a lot of deceptive tactics to mask any unpleasant truths about the pups.

5 – They’re No Bargain
Pet shop dogs are not a bargain, they’re a costly gamble. On top of the overhead and “acceptable losses” puppy mill and pet shop owners add to the price of each dog, there are also a lot of unforeseen expenses. The cost-cutting measures the industry takes are later paid by consumers. CAPS has investigated many cases of disgruntled customers who ended up paying thousands of dollars in veterinary bills on top of experiencing the trauma
of losing a companion.

6 – Dogs and Cats Are a Lifetime Commitment
We won’t deny that puppies and kittens are cute; in fact, they’re adorable! That feeling of awe can quickly be replaced by annoyance when new guardians face training, socialization, potty times, feeding, and vet bills. Not only do dogs require patience, but they inevitably grow up. A cute puppy won’t stay small and playful forever. Dogs grow up and face new needs, just like we do. Some families never adapt to the new lifestyle and end up abandoning their holiday purchases in shelters, where perfectly healthy pure breed
pups face euthanasia due to insufficient space or funds. Other times, families abandon animal companions because they can’t afford costly vet bills. Making such a life-changing decision takes time and careful consideration, the opposite of buying on impulse. The holidays can be a stressful time for both children and adults, so perhaps the best decision
you can make is waiting until January.

Dogs and cats make great companions and offer unconditional love during their lifetimes. If you still want a canine (or feline) family member, please consider adopting. There are millions of four-legged friends in local shelters waiting for a loving home just like yours. For more information on where to adopt, click here.