Our hearts are aching. On April 25, 2017, CAPS Spokesmodel Beatrice passed away. A puppy mill survivor, she was 14 years old. If you follow this blog or keep abreast of our work, you likely know about CAPS’ beloved Basset Hound. She graced the pages of our social media, starred in CAPS videos, and was an indefatigable ambassador in our fight against pet shops and puppy mills.

But even more importantly, she was family.

In 2003, Beatrice was just four months old when our investigators saw her at a USDA-licensed puppy mill in South Dakota. She had just been returned from another mill to whom she had been sold. Beatrice, who was born with deformed elbows and a twisted foot, was considered worthless as breeding stock. CAPS quickly rescued her along with her mother, Grace, and her grandmother, Millie (who both went to wonderful forever homes).

Beatrice was lucky. Unlike most puppy mill dogs, CAPS liberated her from the pet shop/puppy mill cycle after only a few months. But her brief time in the mill left damaging effects.

Beatrice had spent months living with a cough that wasn’t properly treated. Once CAPS got her, we immediately took her to see an internal medicine veterinarian. The diagnosis: mycoplasma pneumonia. She underwent medical care, which cured the pneumonia, but lung scarring from her months without proper care would bother her for the rest of her life.

Genetic defects from inbreeding plagued her, too. She developed Glaucoma when she was four years old, losing sight in one eye. The other eye continued to deteriorate despite a regimen of eye drops. Beatrice was completely blind by the age of 10. She also developed Atypical Addison’s Disease.

To help with her congenitally deformed elbows, Beatrice went to regular physical therapy, which included underwater treadmill walking, swimming, massage, laser therapy, and more. It was a long and often difficult process, but she was not deterred.

In short time, Beatrice became the main canine spokesmodel for CAPS. She had an extensive social media presence, business cards, and an email account. The CAPS legacy society bears her name.

Her role with CAPS, as a puppy mill survivor, was to raise awareness of the pet shop/puppy mill connection and to stress the importance of animal adoption. And she did it in style. When CAPS launched its Models Against Pet Shops and Puppy Mills billboard campaign, Beatrice was the canine star.

Beatrice also participated in CAPS outreach events and appeared in two television PSAs that aired nationwide. As a canine celebrity, she became the face of puppy mill dogs everywhere.

Beatrice passed away on April 25, 2017. In her honor, we have started the Beatrice Memorial Fund, which allows donors to directly support CAPS’ Rescue and Rehabilitation Program. Your donations will help remove dogs and cats from mills and give them the proper veterinary care they deserve. The fund will also help cover the costs of finding loving homes for each of the rescued animals. 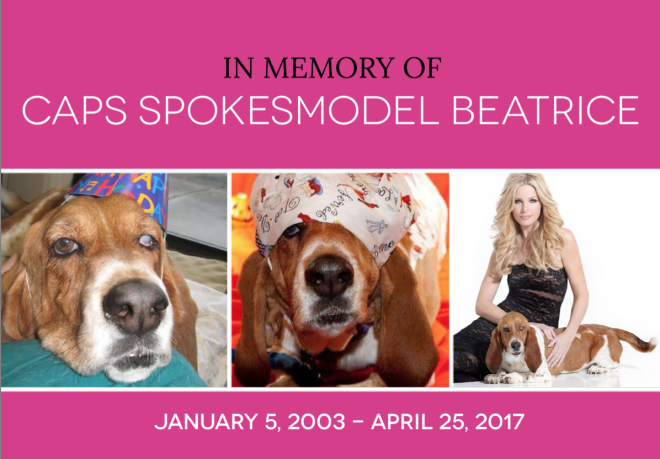 Despite her life’s hellish beginning and its lingering impact, Beatrice was a happy dog, surrounded by a loving family (both humans and animals). Her loss is heartbreaking, but we hope the Beatrice Memorial Fund will be a lasting tribute, giving other animals the same chance at happiness.

You can donate online at www.caps-web.org/beatrice.

As long as the pet shop/animal mill industry exists, CAPS will keep fighting until there are no more animals suffering in its clutches. That, for Beatrice, would be the ultimate tribute—a world without mills. With your help, we can make it happen.