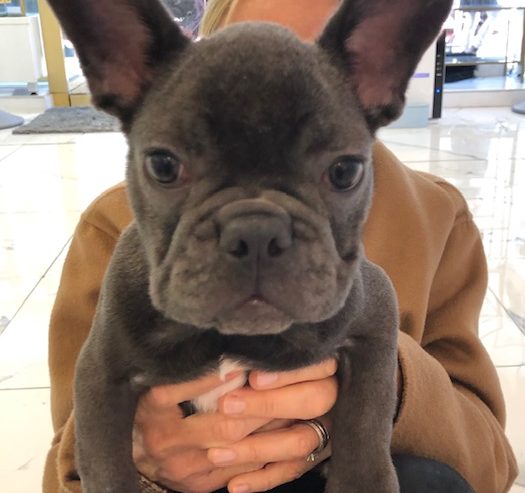 I’m Patricia, a CAPS pet shop investigator. Patricia is not my real name, of course. I have to protect my identity because of the undercover nature of my work. As you may already know, CAPS went into every pet shop – around 100 – in New York over an eight year period for a project with the New York Attorney General. I was one of four investigators who participated in this investigation. The outcome of this groundbreaking project was our compelling short documentary: Undercover with CAPS: An Investigation of New York Pet Shops. CAPS is using this documentary and my current investigative evidence in support of  S1130/A4283, which would ban the retail sale of dogs, cats and rabbits in the state.

In the last few months, I’ve returned to some New York pet shops, including two relatively new ones. One of these pet shops is Puptown NYC on Lexington Avenue on the Upper East Side of New York City. Puptown, which opened just over a year ago, is in a expensive neighborhood inside a posh boutique-type store. The front of the store has floor to ceiling glass windows. These windows each had four cages. I could see 15 puppies in the store, but they keep more in the back, out of sight of customers.

The cages containing puppies had cage cards posted that included each puppy’s store identification code, breed, gender, and date of birth. The cage cards did not contain breeder or broker information. A sign above the sales desk said, “Information on the source of these dogs and cats and the veterinary treatments received by these dogs and cats is available for review by prospective purchasers.” However, there was no signage posted stating that United States Department of Agriculture inspection reports were available to customers upon request, which is a violation of the New York City ordinance. This law requires city pet shops selling dogs or cats to post conspicuously in one-hundred point type: “United States Department of Agriculture inspection reports are available upon request.”

I had scheduled an appointment before my visit, per the store’s policy, to see French Bulldog puppies. I looked at four different puppies individually. A male store employee claimed that the dogs were “all American and come from licensed American breeders that are regulated by the USDA.” He assured me that the breeders they use have a clean inspection records, which we show you. According to the employee, the parents come from places like Arkansas and Missouri.

He promised me that the store only works with licensed breeders. “So they have to like, um, there are some breeders you know that aren’t on the up and up, but like we get from like good, licensed breeders … they pass their inspection records and all that.” I asked him if the store personally visits the breeders. He said he hasn’t visited them, but “the company has.” It is highly unlikely that the store owner has visited the breeders who sell to the store.

Later in the investigation, I got a similar assurance from the female store manager when I asked, “How do you guys know that they don’t come from bad places if you can’t see them?” She replied, “That’s why we have to use USDA. That way we can get approved [breeders}. The breeders already got checked up.”

I asked to see the paperwork for two different puppies, but the manager insisted that I needed to choose just one because this is “personal information.”  Refusing to provide this information upon request is a violation of the New York pet shop lemon law. Information on the source of pet shop dogs and cats and veterinary treatment received must be available for review by prospective purchasers, as defined in the statute.

The manager showed me a USDA inspection report listing Larry W. Graber of Loogootee, Indiana (USDA #32-A-0201) as the breeder of a female French Bulldog. When I asked for an explanation of what I was looking at, she told me that the USDA checks on conditions at the breeding facilities. Then, she stated that USDA comes to their store, too. But USDA has no role in visiting and monitoring pet shops. The New York Department of Agriculture & Markets is responsible for licensing and inspecting pet shops in state. In addition, New York City Department of Health oversees enforcement of the city’s pet shop ordinance. This statement was made to provide a false sense of assurance in the store’s business practices, which could be seen as a deceptive business practice under state law.

I then looked at a blue male French Bulldog puppy, which the manager insisted came from Missouri. I asked to see paperwork this puppy. The manager returned with a folder. She pointed to a Hungarian Certificate of Vaccination that listed Puptown as the owner of the puppy. The certificate was stamped and dated by a veterinarian named Dr. Sin Zoltan located in Balaton, Hungary.

I kept pressing her as to whether or not the parents were in Hungary. “I think so. This one is, yeah…and the kennel [is] here, she replied.  I emphatically stated,”That doesn’t make sense to me.” The manager seemed to be tripping over her words at this point and said she didn’t know. But she insisted that the puppy came from Missouri, even though the rabies inoculation was done by Hungarian doctor. The employee then said, “So the puppy was born here, but the parents are Hungarian.” The manager agreed by stating, “Yeah.”

I then referenced the USDA inspection report provided to me by the manager for the puppy with the Hungarian Certificate of Vaccination. The inspection report was for USDA-licensed breeder Deborah Warren of Pierce City, Missouri. I asked, “But if the parents are Hungarian, then the puppy was born in Hungary, not Pierce City, Missouri.” The manager said, “No, the puppy was born in …,” and the employee interjected “… born in America.” The manager confirmed this by stating, “Yeah.” Both the manager and the employee said the parents were Hungarian dogs who lived in America.

The employees’ statements that the puppy was born in America and bred by a USDA breeder whose facility was inspected by the USDA are extremely false and misleading. Therefore, the numerous statements and assurances made by both employees that all the puppies at the store, and this one puppy in particular, were bred in America are violations of the New York statute against deceptive acts and practices.

Additionally, the manager is in violation of this law for providing me with a USDA inspection report for breeder Deborah Warren, who was clearly not the breeder of the puppy with Hungarian paperwork.

Furthermore, and most egregiously, Puptown is in violation of federal law by importing and offering for sale a puppy less than 6 months old. The date of birth for this puppy as shown on its Certificate of Vaccination was 6-20-2020, thus making the puppy four months and 13 days old on the date of my investigation. Federal law mandates that no person shall import a dog into the United States for resale unless that dog is at least 6 months of age.

Shortly thereafter, as I was taking a photo of the USDA inspection report for breeder Deborah Warren, the manager said, “You can’t take photo of this, I’m sorry …. I mean this is personal information. If you’re signing it, that’s fine.” I said “Oh, I thought that [the information on the USDA Inspection Report] was for me.” She replied, “I mean, you didn’t sign yet.” I said “Oh I’m sorry; I thought that I was going to google this breeder.”

The manager stated, “That’s why we are not allow [sic] customer to take photo. This is their personal license number so we cannot share, like, allow you to do that, I mean, before you purchase. This is yours, but we don’t let people take photo of the breeder info. This is their life, you know? The license information.” The manager’s refusal to let me take a photo of the breeder information is a violation of the New York pet shop lemon law.

The owner, who is listed as Young Gyoo Yang on the Certificate of Incorporation, doesn’t seem to want to have his identity known, probably because he is allegedly violating city, state and federal laws. His address is listed as property in Flushing, Queens, which has a sign for a CPA firm, which could be the registered agent. CAPS has received complaints from customers who purchased puppies under six months that appeared to come from Korea. One puppy had a Korean pedigree, yet they told the customer that the breeders moved to the United States, bringing their dogs with them, and then just happened to sell this puppy to Puptown.

CAPS reported Puptown to USDA for importing puppies under six months of age from countries outside the United States. Shortly after our inspection, New York Agriculture & Markets did an inspection and found violations, including critical ones for a French Bulldog not being given proper veterinary care (paperwork not available) and all 30 dogs not having health exam documents and/or Certificates of Veterinary Inspection (interstate health certificates). The state inspector also cited them for placing incoming dogs in the isolation area, which is only to be used for sick animals, missing paperwork, and lack of required notices for consumers. The inspector returned a month later. His report noted that three French Bulldogs needed rabies vaccinations. We suspect that these dogs were from Hungary, and that Puptown may have hidden the Hungarian rabies certificates to conceal that they are importing puppies under six months of age.

Here is how you can help

Email USDA at ac.dogimport.mailbox@usda.gov to ask them to enforce the following federal law:

7 U.S.C §2148 (b)(1)(C) – Importation of Live Dogs states that no person shall import a dog into the United States for resale unless that dog is at least 6 months of age.