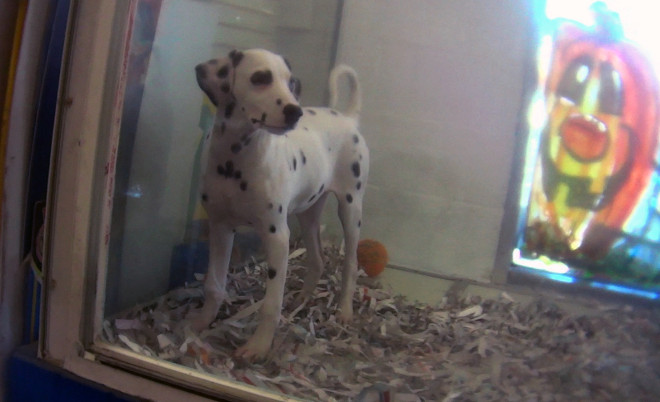 On May 17th, the South Pasadena City Council will hold a hearing on a proposed retail ban of dogs, cats, and rabbits. This is a big deal.

CAPS has been working in California for years, generating ordinances in L.A., San Diego, West Hollywood, and Glendale that ban the retail sale of puppies, kittens, and rabbits. South Pasadena is a vital part of this effort.

L.A.’s current ordinance prevents pet shops there from selling puppies, kittens, or rabbits. However, until all of the towns in surrounding Los Angeles County also ban the sale of those animals, the puppy mill industry will maintain a link to the large L.A. market.

There are currently 12 pet shops selling puppies, kittens, or rabbits in L.A. County, and one of those is Pet’s Delight, a pet shop in the city of South Pasadena. While South Pasadena only has 25,000 residents, it borders L.A., so L.A. consumers can still easily buy a puppy mill animal there.

As the above CAPS video shows, Pet’s Delight has been on our radar for a while. We investigated the shop two years ago and discovered that it was selling dogs bred by Ray and Malinda Yutzy in Princeton, Missouri. The Yutzys are known puppy mill breeders with Animal Welfare Act violations on their record.

Pet’s Delight also obtains many of its puppies through a broker called J.A.K.’s, based in Britt, Iowa. Brokers are a big part of the puppy mill/pet shop chain. Puppy mills often sell their puppies to brokers, who then resell and ship the dogs to pet shops across the country.

J.A.K.’s resells puppies from mill breeders like Doug and Wendie Dettbarn in Strawberry Point, Iowa. When CAPS investigated the Dettbarns’ puppy mill in 2015, we found dozens of filthy and matted dogs who were shivering in their cages, standing on frozen water dishes, and struggling to stay warm in the snow.

J.A.K.’s also obtained puppies from Clearwater Kennels, a large-scale brokering and breeding facility in Cushing, Minnesota, owned by Wanda Kretzman. Clearwater has over 1,200 dogs and has been on the “horrible hundred” list of the nation’s worst puppy mills three times. Last year it paid a $27,000 fine to the USDA for violating the Animal Welfare Act. The facility has since changed its name to AJ’s Angels, using a license under the name of Kretzman’s daughter-in-law.

CAPS investigated the facility back in 2005 when it was called Happy Tails Kennel and located in Little Falls, Minnesota. Even back then, the mill was an immense and terrifying place. As a result of our investigation, Happy Tails was fined by the USDA.

This March, we returned to South Pasadena for a follow-up investigation of Pet’s Delight and were saddened to still find puppy mill dogs in the window. Not only that, but one of those dogs was from Gary Felts.

The name Gary Felts may sound familiar. He’s long been known as one of the nation’s worst puppy mill breeders. Almost seven years ago, the USDA fined him close to $19,000 for Animal Welfare Act violations, and he was required to disclose his financial assets in order to determine a reasonable payment schedule for his fines. But CAPS sent an investigator to his puppy mill in Kingsley, Iowa, and that lead to the discovery that he was hiding assets to avoid paying his fine.

We turned our evidence over to the U.S. Attorney, and Felts plead guilty to one count of making false statements to the federal government. He avoided prison, but he received an additional fine, and the U.S. Attorney recommended that his USDA breeding license be revoked.

Unfortunately, that hasn’t yet happened, and his puppies are still for sale at Pet’s Delight.

Pet’s Delight, like all pet shops, denies using puppy mills. But our investigations have revealed otherwise. This is why the upcoming city council hearing is so important.

If you live in South Pasadena and are concerned about this issue, please call your city council members to let them know you support an ordinance banning the retail sale of puppies, kittens, and rabbits. Or, if you want to take a stronger stand, attend the hearing and speak before the council in support.

The only way to stop the cruel puppy mill/pet shop cycle is to get more cities to pass laws banning the retail sale of animals. If you would like to see a pet shop ordinance in your area, there are two things you can do.

1) Contact CAPS to let us know about any pet shops in your area that sell animals. We can investigate them to gather evidence, then approach your city council with an effective ordinance strategy.

2) If you have purchased a sick or dying puppy or kitten from a pet shop, please fill out a CAPS complaint form. We will use this information to support our ordinance work.

With more than 200 pet shop ordinances in the United States and Canada, the ordinance movement continues to gather steam. Please help us keep this momentum going. Together, we can put a stop to animal mills.