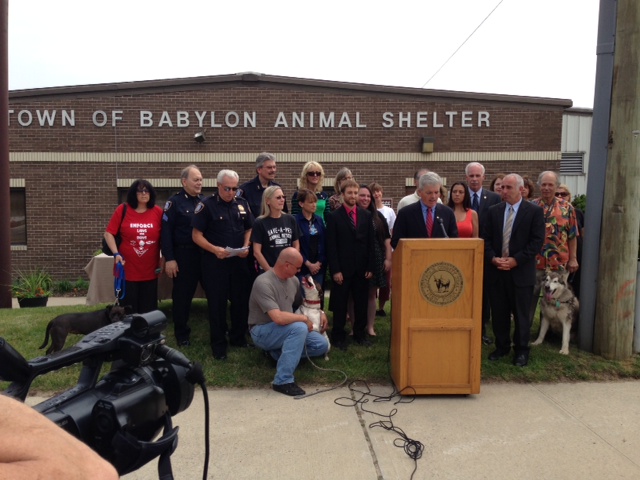 Pet Shop Ordinances are local government laws that crack down on pet stores selling certain companion animals: dogs, cats, and sometimes rabbits. Restrictive type laws can also improve on existing regulations regarding pet shop care, such as requiring the disclosure of detailed records to consumers – including information about where the dogs were obtained. When strictly enforced, municipalities can fine violators.

These type of ordinances are instrumental in diminishing the retail demand for puppy and kitten mill animals. They also promote a humane model of store adoption from shelter and rescue groups. The model helps shelters, rescue organizations and the pet shops – by making adoptions more convenient and increasing the pet shop retail traffic. Ordinances also provide transparency for consumer protection. The benefits are numerous and lasting.

CAPS is the leader in the retail pet shop ban movement. Publications, such as International Business Times and Newsweek, have covered CAPS’ efforts to pass municipal ordinances that ban the retail sale of pet shop puppies, kittens and sometimes rabbits. These ordinances mandate that the source of animals in pet shops be limited to shelter and rescue animals. Evidence from undercover investigations is the key to success in getting ordinances passed, especially in municipalities that have pet shops. In addition to providing extensive documentary evidence in support of ordinances, CAPS is involved in the drafting of municipal legislation, a task that takes many hours.

The following are some of our legislative successes to date:

Thanks in part to CAPS’ efforts, Suffolk County became the first in New York State to pass a ‘puppy mill’ law on June 2014. Even though the ordinance was not an outright ban, it implemented stricter rules for pet dealers and prohibited the sale of animals from proven puppy mills. This landmark legislation was possible because of a push, by CAPS and other animal welfare organizations, on New York State government to allow municipalities to enforce stricter local regulations for pet dealers. A “Pet Dealer” Bill was signed into law by Governor Andrew Cuomo on January, 2014, and for the first time communities were able to choose if they wanted to enact tougher rules for pet dealers.

“Today is a victory for Suffolk County’s animal advocates and puppy mill breeding dogs. The passage of the “Puppy Mill Bill” is a testament to how we can produce positive results for companion animals by working closely with other animal advocacy groups. It has been a privilege to work with local legislators and educate them on the connection between puppy mills and our local pet dealers. This bill is a first step in stopping Suffolk County’s pet dealers from sourcing puppies from puppy mills. It holds pet dealers accountable, something that was long overdue.”

On July 9th, 2013 the city council committee made a unanimous decision to ban the commercial sale of dogs, cats, and rabbits making San Diego the 2nd largest city in the US to ban the sale of companion animals. Currently, San Diego Puppy and The Pet Market are the only pet shops remaining in the city of San Diego.  CAPS initiated the ordinance more than a year ago after a two-year investigation of puppy mills that supply pet stores in Southern California. CAPS began investigating San Diego Puppy in June of 2011 after complaints from consumers who had purchased sick and dying puppies. The owner of San Diego Puppy, who first sold over the Internet and opened his store in the spring of 2012, obtains puppies from The Hunte Corporation.

CAPS is also behind the Los Angeles ordinance banning the sale of pet shop puppies, kittens and rabbits that passed in November 2012. In January and February of 2011, CAPS provided the Los Angeles City Council with the results of its two-year investigation into L.A.’s retail pet stores and the California and Midwest commercial breeding factories that supply them. The undercover investigation included video and photographic evidence of puppy mill operators who routinely violated the Animal Welfare Act, as well as state laws to protect animals. CAPS uncovered evidence that L.A.’s pet retailers are currently in business with commercial breeders (puppy mills) who are neglecting and abusing animals, repeatedly violating USDA minimum standards of care. CAPS also discovered that L.A.’s pet stores are fraudulently selling sick and dying animals that come from substandard commercial breeding facilities and misleading consumers.

In the Chicago area, the Villa Park City Council passed an ordinance in October 2012 banning pet shops that haven’t leased or owned a retail store for at least one year from selling puppies and kittens.  Being a non-home rule town, they couldn’t do an outright ban. However, the only remaining pet shop in the town no longer sells dogs. The ordinance, which also bans the sale of pets in farmers markets, flea markets and parking lots, is the first one in Illinois. The CAPS Chicago team is now working on trying to get ordinances passed in other towns, especially those with Petland and Happiness is Pets stores.

In October 2011, the Irvine City Council passed a ban on the sale of pet shops puppies and kittens, using, as Glendale did, language similar to that of the West Hollywood ordinance. Just before the passage of the ordinance, the Irvine Company announced that its properties will no longer lease to pet shops that sell puppies and kittens. The two Russo’s stores will have to leave once their leases expire (the Newport Beach location has four more years).

The Glendale City Council passed an ordinance in August 2011 banning the sale of cats and dogs in pet stores. In June 2011, CAPS presented an investigation report to Glendale’s City Attorney Scott Howard. The report included evidence of violations that were occurring in Glendale’s Pets R Us, which obtained its puppies from The Hunte Corporation in Goodman, MO. CAPS conducted a six-month undercover investigation at Hunte, the largest dog brokering facility in the country, as well as investigating 50 of their breeders, who were mostly USDA licensed. Approximately 50 percent of these puppy mills had serious enough violations to warrant an investigation report to the USDA. “The information provided to our office by CAPS representatives was fact-based and assisted us with the preparation of a report and ordinance. Their efforts to address the problems associated with substandard breeding facilities is to be applauded and their assistance to our office is greatly appreciated,” said Howard.

Following a CAPS undercover investigation of West Hollywood pet shops and a nearly six month protest of Elite Animals, the West Hollywood City Council passed an ordinance in February 2010 prohibiting the sale of dogs and cats in pet shops, with an exemption for the adoption of shelter and rescue animals.

Media coverage of CAPS and the West Hollywood ordinance included The New York Times, Los Angeles Times, ABC, NBC and CBS in Los Angeles, About.com.  In fact, media throughout the U.S. and the world (even New Zealand) covered this compelling story.

A CAPS investigation of Elite Animals revealed that the store was selling puppy mill dogs and defrauding customers.  Undercover footage shot by a CAPS investigator showed employees telling the investigator that the puppies came from “good private breeders.”  Elite Animals was also selling dogs from puppy mills in Russia and violating a federal law prohibiting the import of dogs under the age of six months for resale.

The main suppliers to Elite Animals were Gerry and Angie Wensmann, USDA licensed brokers in Minnesota, who sell to pet shops all over the country.  Elite Animals proudly displayed a photograph of Governor Arnold Schwarzenegger, to whom the pet shop sold a Wensmann puppy in 2000.  CAPS investigations of the Wensmann puppy mill documented sick and injured animals in need of veterinary care, substandard housing with badly stained flooring, broken wood and jagged rusty wires that posed a danger to the dogs, green algae water, rusting, filthy feeders with soggy food, fecal and urine accumulation, and dogs whose feet were slipping through wire flooring.  The Wensmanns also breed cats in buildings that CAPS has been unable to access.  A 2008 USDA inspection stated that kittens were panting in 95 degree heat in a trailer house.  Yet despite CAPS investigation evidence presented to USDA and USDA reports with serious violations, USDA has not taken action.  We are very encouraged, though, that evidence from CAPS investigations led to the ordinance.

CAPS also has a presence in Sarasota, where CAPS President Deborah Howard attended New College of Florida. In the county, we mounted a strong campaign against Puppy Town, which obtains puppies from the Hunte Corporation and an unlicensed Internet breeder/seller. Our efforts placed all three of the pet shops that sell puppy mill dogs on the spotlight, including a Petland franchise. Despite our initial setbacks, CAPS continues to work with the county commission on an ordinance to ban the retail sale of puppies, kittens and rabbits. When we succeed, Sarasota will be the first county in Florida and the country to pass such an ordinance.

CAPS New York team is currently assisting with several ordinances and mounting investigative evidence to support them. CAPS has a strong presence in New York and worked closely with the New York Attorney General’s Office on several cases.