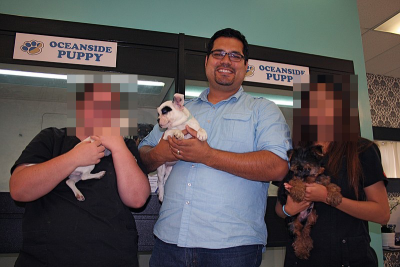 It was the Summer of 2008 in West Hollywood, California. Inside Elite Animals, a proudly displayed photograph showed Governor Arnold Schwarzenegger with his puppy. Outside Elite Animals, CAPS activists protested every weekend for six months. The Schwarzenegger family most likely didn’t know that their puppy, purchased from Elite Animals in 2000, came from the Wensmann puppy and kitten mill in Minnesota. CAPS’ two investigations of the Wensmann mill revealed serious Animal Welfare Act violations. A USDA inspection report cited the Wensmanns for a kitten panting in 95-degree heat. Yet, the Wensmanns continued to have a license until Mr. Wensmann passed away in 2017. Read more information on this report and investigation HERE.

However, something groundbreaking was about to take place. Our protests and investigations of Elite Animals and the source of their puppies caught the attention of West Hollywood City Council members. A few council members came to protests to speak to CAPS’ then California director. CAPS and the city council decided that an ordinance banning the retail sale of dogs and cats would be the most effective way to deal with Elite Animals and future pet shops that could sell puppies and kittens.

The West Hollywood ordinance, which passed in February 2010, received worldwide media attention and was the genesis for the ordinance movement in the United States and Canada. There are currently 340 municipal ordinances and one state law in California. Maryland’s law takes effect on January 1, 2020.

CAPS is the leader in the pet shop ordinance movement. Publications, such as International Business Times and Newsweek, have covered CAPS’ efforts to pass municipal ordinances that ban the retail sale of dogs, cats, and sometimes rabbits. You can read the IB Times article  HERE. These ordinances mandate that the source of animals in pet shops be limited to shelter and rescue animals. Evidence from undercover investigations is the key to success in getting ordinances passed, especially in municipalities with pet shops. In addition to providing extensive documentary evidence in support of municipal ordinances and state laws, CAPS is actively involved in legislative drafting

Read below for an update on CAPS’ legislative and investigative work to ban the retail sale of dogs, cats, and rabbits in New York, California, and Massachusetts. Other states where we are focusing our investigative and legislative efforts include Connecticut, New Jersey and Florida.

In May, CAPS released a compelling 13-minute documentary that documents our five-year investigation of every New York pet shop – we went to more than 100 – and numerous puppy and kitten mills selling to them.

Undercover with CAPS: An Investigation of New York Pet Shops from CAPS on Vimeo.

“Undercover with CAPS: An Investigation of New York Pet Shops” is critical evidence for state legislation, S4234 and A6298, to ban the retail sale of dogs, cats, and rabbits. With 76 New York pet shops currently selling dogs and cats, a statewide retail ban would deny animal mills access to their largest market in the country. Unfortunately, stalling by the chair of the New York Senate Domestic Animal Welfare Committee during the 2019 session allowed pet shops to mobilize and get enough senators to change their vote to No. We are already meeting with legislators ahead of the 2020 legislative session, where we intend to get this legislation passed.

Because of the loophole in the California law that is allowing the sale of pet shop puppies from fraudulent rescues, we urged Senator Patrick O’Connor, the sponsor of S.175, which bans the retail sale of dogs, cats and rabbits, to use strict language that prevents this fraud. The legislation states that pet shops cannot have a monetary or ownership interest in the animals and cannot benefit financially from adoption fees. CAPS also persuaded Senator O’Connor to add rabbits to the bill. CAPS submitted in-depth written testimony and extensive evidence to the Joint Committee on Consumer Protection and Professional Licensure, which will vote on the bill in the fall.

An Investigation of Massachusetts Pet Shops (2018) from CAPS on Vimeo.

CAPS produced a revealing exposé about our investigation of California pet shops selling puppies from fraudulent rescues to circumvent The Pet Rescue and Adoption Act (AB 485).

CAPS spent 10 years laying the groundwork for AB 485 – the first in the nation to ban the sale of dogs, cats, and rabbits by pet shops statewide. After January 1 of this year, 19 pet shops were still selling puppies, with 16 using two fraudulent rescues – fronts for puppy mill brokers. Our in-depth investigation persuaded attorneys generals in Iowa, California and Missouri to open their own investigations into the consumer fraud being perpetrated by the pet shops and the fraudulent rescues. Because Assemblymember Patrick O’Donnell, the sponsor of AB 485, did not amend The Pet Rescue and Adoption Act this year to close the loophole in the law’s language that is allowing fraud to take place, local municipalities are taking action. 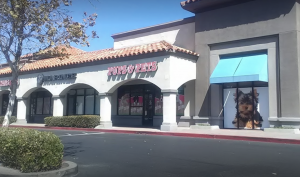 The city attorney followed our recommendation to use the Massachusetts legislative language that closes the California law’s loophole. We are hoping that the other California municipalities with pet shops selling puppies from fraudulent rescues will follow the lead of National City. Check out the full ordinance HERE. 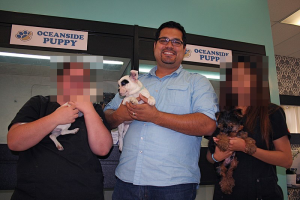 Unfortunately, David Salinas, the owner of National City Puppy and four more Southern California pet shops, is suing National City over the ordinance and has obtained a temporary restraining order, thus preventing the ordinance from going into effect on October 3, 2019. Salinas claims he has obtained the necessary 3,000 signatures for a referendum to overturn the National City ordinance. Salinas used paid signature gatherers, and the crudely made signs used to persuade people to sign the petition are certainly misleading. 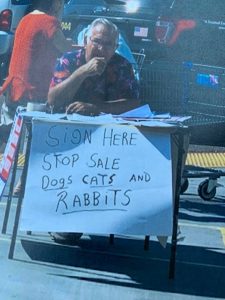 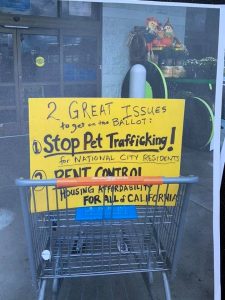 The National City city clerk will examine the petition over to make sure it is valid and contains the correct number of signatures. Then the San Diego County registrar will check each signature to determine if it is valid. Signers must be residents of National City. The city has received a number of phone calls from people who wish to take their name off of the list.

Any information about the fraudulent actions of the individuals obtaining signatures on any petition should be forwarded to the San Diego district attorney’s office: https://www.sdcda.org/office/contact/index.html 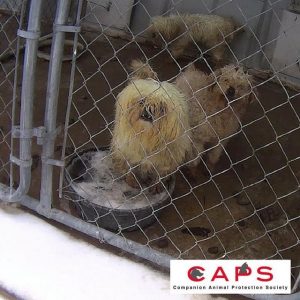 Municipalities rely on CAPS’ investigative, legislative and legal expertise to effectively address the cruel pet shop and puppy/kitten mill industry. CAPS was responsible for ordinances in Los Angeles, San Diego, New York City, Sarasota County and elsewhere and has assisted with many more. Here is the current list of ordinances in the United States and Canada: link to ordinance document

CAPS, as the nonprofit that pioneered the ordinance movement, is bringing our extensive expertise and comprehensive resources to legislative efforts to ban the retail sale of dogs, cats, and rabbits. The key to passing these kinds of laws is evidence. Pet shop and puppy/kitten mill investigations are costly.

For a list of ALL pet shop ordinances and state legislation passed in the United States and Canada, READ HERE.

How You Can Help:

Please donate: Ongoing, generous gifts from our donors makes the victories in this fight against the pet shop and mill industry possible.