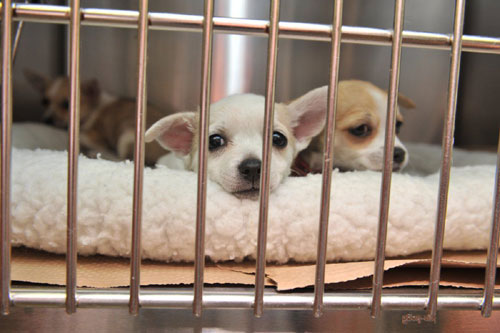 Albany, N.Y. – On Thursday, January 9, 2014, Governor Andrew Cuomo signed A.740-A/S.3753-A or the “puppy mill bill” into law. The new legislation, which the New York State legislature passed last summer, will allow local governments, like New York City, to enact stricter laws regarding pet dealers. Municipalities in New York will now be able to pass ordinances like those sponsored by the Companion Animal Protection Society in California, Illinois, and Florida.

Assembly member Linda B. Rosenthal, one of the bill’s sponsors, stressed in a press release published by the governor’s office the significance of the law by calling it a “watershed moment for animal protection in New York State.” She went on to explain that the law will give the people of New York a powerful tool to “crack down on puppy mills and bad breeders.” As an example, she brought up the alleged case of animal cruelty that occurred during the polar vortex weather event in Sprakers, NY where approximately 100 dogs from Flat Creek Border Collies were left outside for days as temperatures dipped below zero.

The puppy mill in Sprakers dramatically exemplifies why communities can’t rely on state agencies to enforce animal welfare laws. Animal lovers from New York and all over the United States used social media to shed light on the situation that later led police to investigate the facility. After several visits to the mill, New York State Police issued a statement claiming they couldn’t find any violations to New York State Law or local code. The situation quickly turned into a rallying point for stronger regulations on pet dealers which reinforced the importance of the new law.

The next step for the animal welfare community in NY will be to begin drafting and introducing ordinances to regulate pet shops and puppy mills. CAPS will work with local communities, following the footsteps of places like Los Angeles, CA and Villa Park, IL, to create legislation that will truly address the concerns of the state’s animal lovers. With cities in NY joining the anti-puppy mill movement, it will be just a matter of time before we can finally put an end to the puppy mill – pet shop cycle.

For more information about CAPS ordinances, go to www.caps-web.org/ordinances