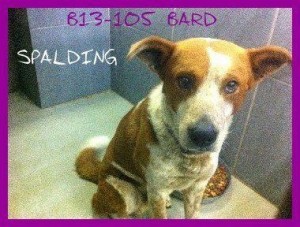 Meet Oliver, the newest addition to the Howard household. The two-year-old cattle mix joined CAPS President Deborah Howard, his canine siblings Spencer, Wylie, and CAPS Spokesmodel Beatrice, and his feline siblings Jack and Miles on April 13. His story begins, believe it or not, with an image posted by Spalding County Animal Shelter volunteer Suzy Bailey on Facebook urging the online community to adopt a sweet-looking boy named Bard before March 29. It was love at first sight.

After many calls and e-mails, his destiny was set: he was moving in with his new family in Cohasset, MA. The former stray was taken out of the shelter by Kathryn Hinkle and stayed at Safe Harbor Kennels (owned by Hinkle) until his homecoming day. After hours on the Paws Aboard Transport, he arrived on a Saturday to an expectant crew of wagging tails in Johnston, RI. The Howard crew had been waiting for his arrival since Friday and stayed at the Residence Inn in Foxboro, MA so they’d be closer to RI. The ride to his new home was a whole-new experience as he got to rest in the back of the car nestled between his new siblings. Even Beatrice, the princess of the family, was willing to share her spot by the window.

Oliver, named after the famous orphan in Charles Dickens’ novel “Oliver Twist,” likes going to the beach, trail running, fetching a green rubber bone, wrestling with his big brother Wylie, and sleeping in bed with his head on the pillows (preferably next to Deborah, Spencer, and Wylie). When playtime is over, he learns obedience through clicker training and already knows how to sit. He enjoys trail running with Deborah and runs back when she uses the whistle. At the end of the day, all this boy wants is love, especially when he gets to give all the kisses and hugs.

The sweetheart formerly known as Bard (and almost named Barney) is a poster boy for adoption. Oliver has a second chance in life, and all it took was sharing a Facebook picture of an abandoned dog in desperate need of a home. Despite his exciting transition into a loving household, Oliver still has a long road ahead of him. He is getting neutered soon and, since he is heartworm positive with no symptoms, has to undergo treatment and will be seeing Dr. Barret Bulmer, a Tufts cardiologist, this Friday. Despite the vet appointments awaiting him, the worst is over.