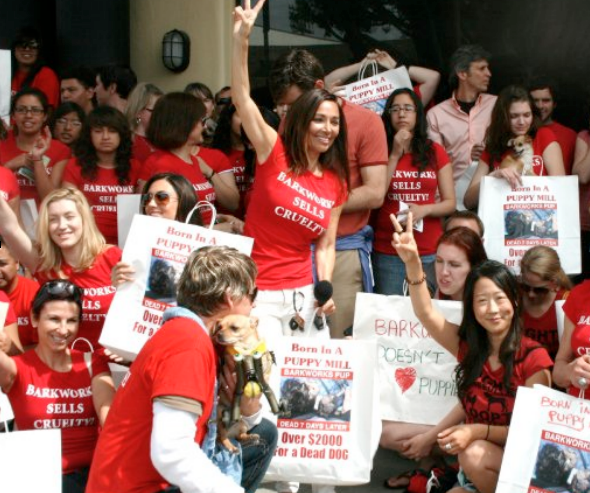 A landmark ordinance, spearheaded by the Companion Animal Protection Society (CAPS), officially passed on Wednesday. The ban was the result of years of pressure from non-profit organizations like CAPS to curb the influx of puppy mill dogs into big cities. In February of last year, CAPS provided the Los Angeles City Council with the results of its two year investigation into LA’s retail pet stores and the commercial breeding facilities – mostly from the Midwest and rural California – that supplied them.

In addition to the undercover investigations, CAPS organized hundreds of protests in Los Angeles pet stores that also put pressure on local officials to act against puppy mills. CAPS led a landmark protest in 2009 inside the Westside Pavilion Mall in Los Angeles against one of seven Barkworks stores, which set the stage for a long campaign in the Southern California. CAPS broke new ground in the California animal protection movement by invoking the more expansive California Constitution to legally protest inside a mall, which is a de facto public forum under California case law.

CAPS continued its Barkworks campaign by holding several more protests at three malls, often with more than 100 participants. One of our unique protests included more than 70 inner city public high school students who got involved after learning about the puppy mill-pet shop-shelter connection from CAPS. CAPS’ campaigns in the Los Angeles area also pushed several retailers into switching to a humane business model, on which part of the LA ordinance is based. In an eight-month period, four stores stopped selling puppy mill dogs and began offering animals from shelters and rescue organizations.

“After eight years of investigations and protests, we are satisfied and optimistic about breaking the blood money contracts between puppy mill owners who abuse animals and L.A. pet retailers. This ordinance will relieve mill animals and help save the lives of animals who are killed at Los Angeles Animal Services. The 2011-2012 body count is unacceptable, with 9,056 dogs and 12,061 cats killed in our shelters. We are relieved that finally, the cries of L.A.’s shelter animals have been heard. Puppy mills and cruel pet factories will fade into history at last,” said Companion Animal Protection Society West Coast Director Carole Raphaelle Davis.

The legislation is particularly important because it makes LA the largest city in the US and Canada to ban pet stores from selling dogs, cats and rabbits from commercial breeders. CAPS has consistently supplied reliable evidence to cities determined to stop puppy mills from selling dogs to their communities. Our West Hollywood, California ordinance banning the sale of pet shop puppies and kittens received worldwide media coverage and was the genesis for the now growing ordinance movement in both this country and Canada.

There are ordinances banning the sale of pet shop puppies and kittens in California, Florida, Illinois, New Jersey, New Mexico, Texas and Canada. We assisted with the by-law in Richmond, British Columbia, which was the inspiration for the recently passed by-law in Toronto. CAPS also worked with Legislator Jon Cooper in Suffolk County before he withdrew his proposed ordinance due to state preemption, which CAPS is now trying to get removed from the state lemon law.

The West Hollywood ordinance, which passed in February of 2010, was possible because of the relentless work of the CAPS West Cost team, which submitted CAPS undercover investigation of the local pet shop and the atrocious Wensmann puppy mill in Minnesota that supplied this pet shop. CAPS was subsequently involved with getting pet shop ordinances passed in Glendale and Irvine, Calif. CAPS was recently involved in getting the first pet shop ordinance passed in Illinois and is working on other municipalities in the Chicago area. Sarasota County, which has three pet shops, is also on the agenda.

The LA ban was introduced by Councilman Paul Koretz, a West Hollywood Council member from 2000 to 2006 and a longtime supporter of animal rights. The measure will give a much needed boost to the overburdened municipal shelter system, which currently has thousands of pets ready for adoption.

“Finally, an end to rabbits bred in cruel pet factories who are then trucked to unscrupulous retail animal dealers here in L.A., only to live out their sad lives in a cage. We have high hopes that consumers will now gladly turn to the shelters to adopt homeless and sterilized rabbits,” said President of Bunny World Foundation Lejla Hadzimuratovic.