My name is Bentley. I am a 5-year-old Basset Hound who is CAPS’ new canine spokesmodel. CAPS Spokesmodel Beatrice, whom CAPS rescued from a South Dakota puppy with her mother and grandmother in 2003, was quite a celebrity, so I know I have some big paws to fill. I’ll try my hardest with your love and encouragement.

I have taken over Bea’s clean up duties in the kitchen, and best of all, I have commandeered Bea’s orthopedic sofa bed, which was donated by a beloved CAPS donor.  To be clear, Bea’s bed is now MY bed, not Oliver’s! We had to buy another Orvis sofa bed for Oliver, and Orvis donated one that I sometimes use in the bedroom for sleeping at night. A big thanks to Orvis!

I finally figured out how to use the steps to Mamacita’s bed. It requires a hop after climbing the two steps. I sleep in Wylie’s old spot next to Mamacita, and I do not allow Oliver in MY spot. 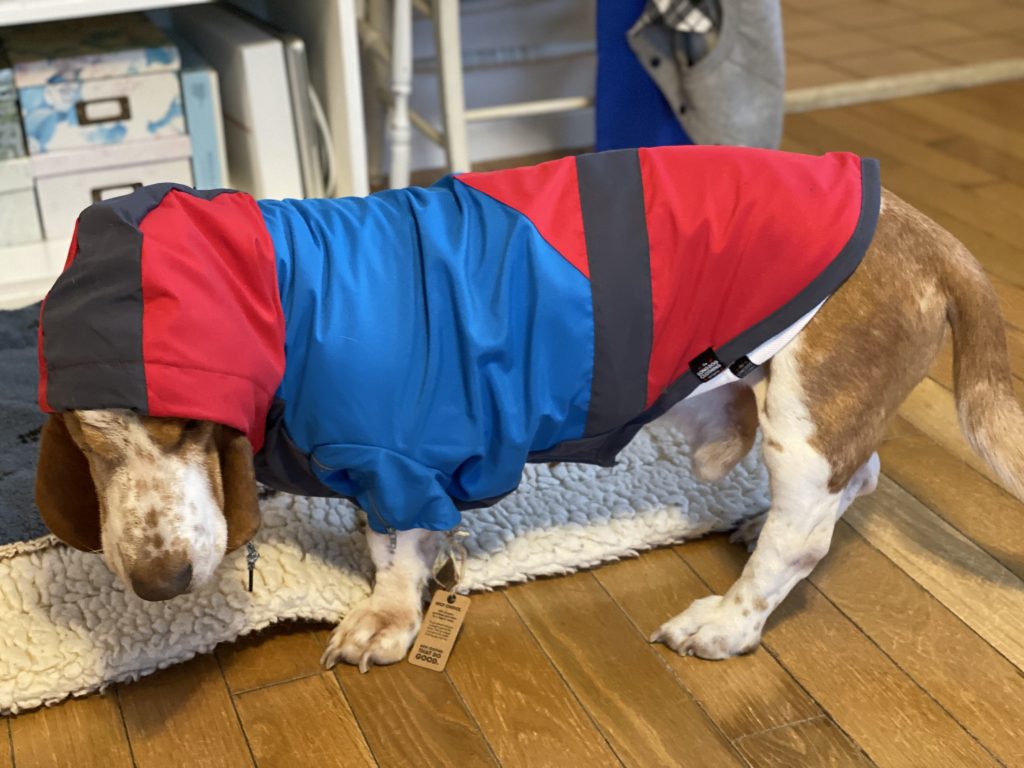 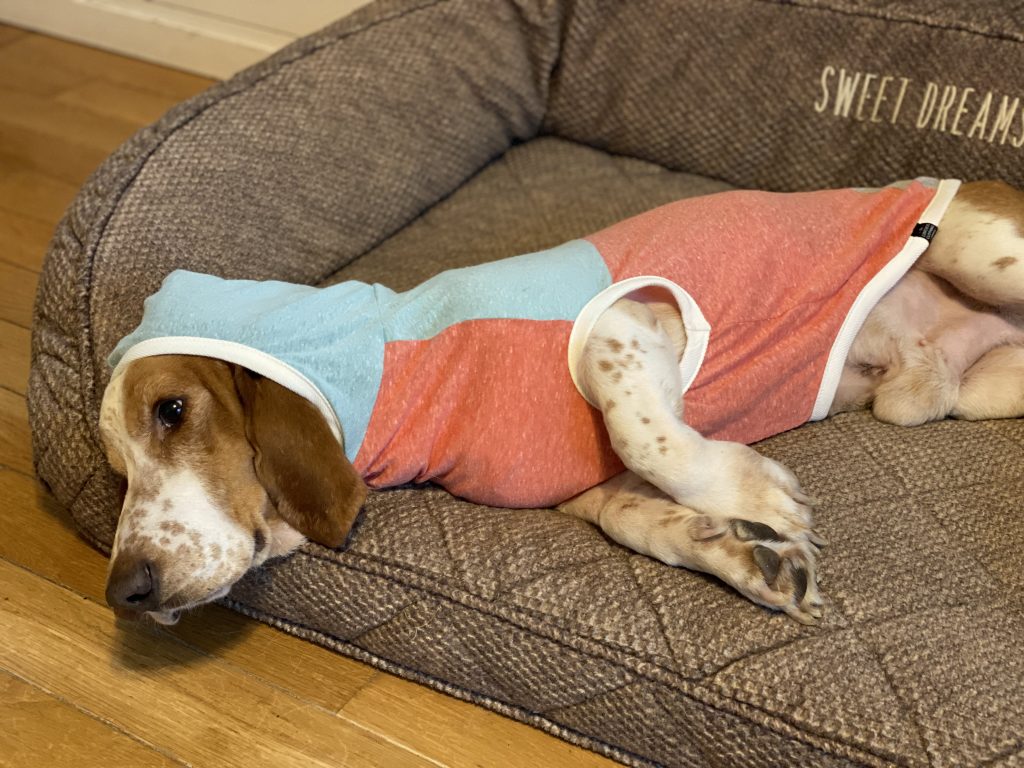 I love to wear clothes! The Sufer and The Pilot-Windbreaker, are from The Long Dog Clothing Company, which is based in Mamacita’s hometown of Los Angeles. We love their clothes. They gave us a generous discount and said they’d donate outfits if I agreed to model them. Of course, I will! I am a spokesmodel, after all.

I once had a family. But I guess they didn’t want me when I developed glaucoma in my right eye, which caused blindness. So, they abandoned me, and I found myself on the streets of Arroyo, Puerto Rico, trying to find food (I love to eat!). I was very hungry and lost weight. I also developed heartworm disease and Erlichia, a tickborne virus that, as we later found out, didn’t receive adequate veterinary treatment while I was in PR and caused a very scary episode for Mamacita and me in February (I am well now, but Mamacita thought I was going to die).

Luckily, nice ladies rescued me in September. I had to live at the vet clinic for a couple months while I received treatment for heartworm disease and had my eye removed. Then I went on an airplane to Boston, met Oliver and Mamacita, and became part of CAPS.

Mamacita has a soft spot for Basset Hounds because of Beatrice, and for satos like me because of Carmen, a Chihuahua and Rat Terrier mix whom CAPS rescued from Puerto Rico in 1996. Carmen had an advice column called “Ask Carmen” that some of our longtime donors may remember.

I’m very excited about my new home with CAPS. I love my canine brother Oliver and my feline brothers Emerson and Prince Charming. Most of all, I love my new Mamacita, CAPS President Deborah Howard.

Be sure to follow my adventures on Facebook under Beatrice and on Instagram under capsdog (my Mamacita’s page, where I have a lot of posts) and caps_web and encourage your friends to do the same.

I have lots more to tell you, so be sure to continue reading the CAPS blogs.