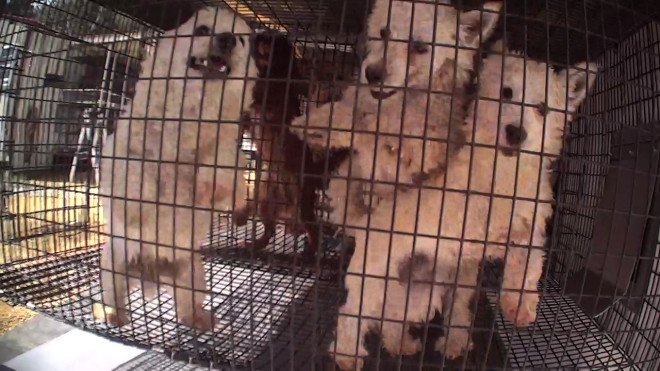 B&C Kennels in Clare, Illinois, is a dog breeding facility that sells puppies to the public. It is owned by Christie Hardt and Robert DeCosta. On their website, they refer to themselves as a “cooperative kennel,” which they explain means that in addition to the puppies they breed, they also sell puppies that were bred at other kennels. So essentially, they’re both a puppy mill and a pet shop.

B&C was on the 2016 “Horrible Hundred” list of the worst puppy mills in the country. It has also been fined $1.000 by the Illinois Department Of Agriculture for not vaccinating dogs for Canine Brucellosis. While CAPS has not been inside of B&C Kennels to verify the conditions there, we have been to, and investigated, their primary puppy supplier: A-1 Puppy.

A-1 Puppy is a puppy mill in Morris Chapel, Tennessee, owned by Angela Shubert. CAPS investigated A-1 Puppy in 2015, and discovered that the facility had 600 dogs and 120 puppies.

CAPS investigation of A-1 Puppy

In the above video, when Angela Shubert says she sends a truckload of 80 puppies to Chicago every other week, B&C Kennels is most likely to whom she’s referring.

In 2014, USDA inspectors cited Angela Shubert for three violations of the Animal Welfare Act: She was performing dewclaw removal and tail docking procedures with no program of veterinary care; her adult dogs were not microchipped; and puppies’ feet were falling through wire cage floors.

In 2015, Angela Shubert was cited for two more violations: She was using chicken medicine on the sick dogs; and her dogs did not have enough room in the cages to turn around.

Hundreds of Angela Shubert’s puppies have been sold by B&C Kennels.

B&C is located in DeKalb County, IL, which issued the kennel a special use permit seven years ago that allows up to 40 dogs to be on the property. B&C has been violating this permit for years, keeping many more than 40 dogs on site. In 2016, they sold 535 puppies. CAPS brought this to the attention of DeKalb County, and B&C then asked for another special permit allowing for even more dogs.

On May 24, the DeKalb County Planning & Zoning committee voted to recommend that B&C’s request for this new permit be denied. The full DeKalb County board will vote on the issue on June 21.

Meanwhile, B&C has also asked for another special use permit in Ogle County, where they want to expand their operations. The Zoning Department there also recommended against giving them a permit, but the next Planning & Zoning meeting is on June 13th. at 10am, where it will face a final vote. Then it will go before the County Board for approval.

Also, if you have been sold a sick dog from B&C Kennels, or one that was bred by Angela Subert, please fill out our pet shop complaint form: https://www.caps-web.org/take-action/caps-complaint-form

THANK YOU to all who have helped with this. Please spread the word in Ogle and DeKalb counties!