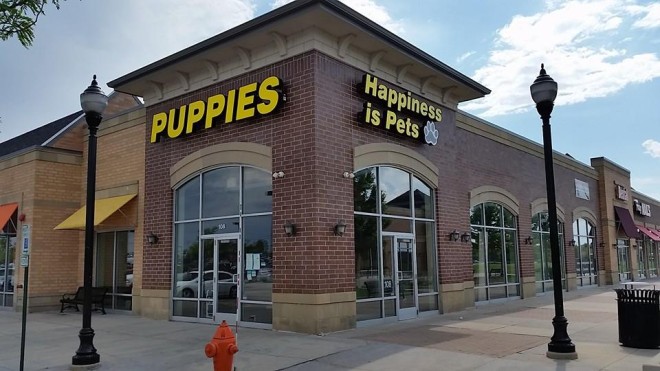 Happiness Is Pets in Naperville, IL

During that same time, Chicago Animal Care & Control put down 2,451 dogs. That figure is just fromone animal shelter in Illinois. There are many more. I have to wonder how many of the dogs purchased at Happiness Is Pets ended up in a shelter like that one? Because when customers buy puppy mill dogs, which are often sick or plagued with behavioral issues, it’s common for the dog to eventually end up in a shelter. The shelter dogs are then euthanized, while more puppy mill dogs fill the pet shop windows.

And the cycle goes on and on and on…..

CAPS has been protesting the Happiness Is Pets chain for over 9 years, and we know that our protests and outreach are working. Since 2008, their annual sales numbers have dropped by over 1,500 puppies. But it’s not enough, so we need to keep it up. Especially now, when national attention is focused on other issues, we can’t forget about the breeding dogs stuck in puppy mills.

In 2012, we helped file a class action lawsuit against Happiness Is Pets. The parties settled out of court last year, and since then the pet shop has gotten paranoid. A recent customer told us that before purchasing a puppy, she had to sign an agreement saying she wouldn’t participate in a class action lawsuit, should one be forthcoming. Hmmm……does that tell you anything? The pet shop is so worried about their “product,” that they make customers agree not to sue should that “product” get sick or die.

The unfortunate customer signed the agreement when buying a puppy in October 2016 from the Arlington Heights location. The puppy died a few months later. The breeder was Davis & Mary Harris, at Hawk Ridge Kennels in Portland, Missouri.

If you have purchased a sick or dying dog, at Happiness Is Pets or at any other pet shop, please fill out this pet shop complaint form:

The towns that support Happiness Is Pets are refusing to go humane. We have tried time and again, but they will only pass disclosure ordinances, which only help the pet shops. Pet shops in the area are allowed to use both unlicensed breeders (which they call “hobby breeders”) and licensed puppy mills. I don’t know which is worse, the “hobby breeder” with no oversight at all, or the inhumane legal puppy mill. Especially now that the USDA has taken down its puppy mill inspection database. If a consumer wants to research the conditions of a licensed puppy mill, she can no longer get the necessary information.

CAPS holds monthly protests at Happiness Is Pets, and we would love to have you join us. In April, there will be a protest at the Lombard location. If you would like to participate, please email Maya at amalia1994@aol.com. Thank you!