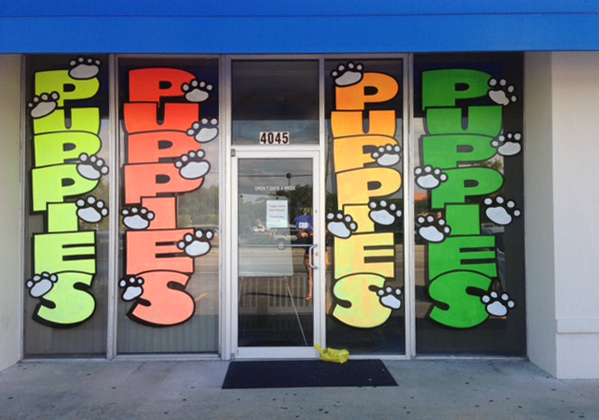 We’ve got good news and bad news. The good news is that Hillsborough County, Florida, just became the latest municipality in the state to ban the retail sale of puppies and kittens in pet shops. The county commissioners unanimously voted in favor of the new law. The bad news…

They exempted three existing pet shops, grandfathering them in.

This decision is all the more shocking given what just happened earlier this week to the owner of one of the grandfathered shops. Michael Lamprea, the owner of Puppies Tampa, was arrested for selling puppies without health permits. CAPS has been on this guy for a while.

In nearby Sarasota County, Michael Lamprea once owned a pet shop called Puppy Town, which obtained puppies from the massive (and inhumane) Hunte Corporation. Hunte is a broker that resells puppy mill animals from across the Midwest. CAPS put an undercover investigator inside Hunte for six weeks, and what he found there was beyond disturbing.

CAPS started peacefully demonstrating outside of Puppy Town five years ago, handing out information on puppy mills and animal adoption. The protests put a spotlight on the pet shop problem in Sarasota County and received media coverage from local TV stations. Thankfully, local pressure eventually drove Puppy Town out of business. The store closed in 2014.

News coverage of the Sarasota protest

Several county commissioners heard about the Puppy Town protests, and CAPS convinced them that the county needed an ordinance to ban the retail sale of mill animals. We worked with them to provide an initial draft of the ordinance and gave extensive legal advice and investigatory evidence.

It took a while, but in January of last year, the Sarasota County Commissioner finally voted the proposed ordinance into law, making Sarasota the first county in Florida to ban the retail sale of puppies and kittens (we tried to include rabbits, but they were exempted from the final law). CAPS President Deborah Howard testified at the hearing for the vote.

Meanwhile, in nearby Hillsborough County, Michael Lamprea was still selling puppy mill animals at his other pet shop: Puppies Tampa.

CAPS shifted its focus to Hillsborough and approached the county about passing an ordinance there, too. We also put up a Models Against Pet Shops and Puppy Mills billboard at the end of the Puppies Tampa parking lot, informing potential customers about horror of puppy mills.

All the while, we continued to investigate Michael Lamprea and discovered that there were no Certificates of Veterinary Inspection (CVIs for short) filed with the state for the puppies he was selling. Florida law requires that CVIs be filed for all dogs coming in across state lines. In addition, a Florida-based veterinarian must examine dogs coming from out of state and fill out a Florida health certificate.

Since we knew that Lamprea was buying dogs from Midwest puppy mills, it seemed odd that the State Dept. of Agriculture didn’t have any CVIs on record for his shop. We let the department know, and they sent inspectors to the store. What they found was exactly what we suspected.

Puppies Tampa was selling dogs without veterinary records. When Lamprea refused to cooperate with the inspectors, he was arrested. He has been charged with first and second-degree misdemeanors for selling dogs without CVIs and for obstructing a state department employee.

After this, we had high hopes that the county commissioners would realize that it was a bad idea to grandfather in the existing pet shops. Sadly, they did not.

The ordinance they passed requires the existing pet shops to buy puppies from USDA-licensed breeders without certain violations on their records in the last two years. That sounds good on paper, but as anyone familiar with the issue knows, almost all puppy mills are USDA-licensed breeders. And as CAPS has repeatedly documented, the USDA does a terrible job of inspecting and citing Animal Welfare Act violations at mills.

Also, now that the USDA has removed public access to its online database of inspection reports, it will be difficult for Hillsborough County to even find out if breeders have violations, so the enforcement of this new regulation is nearly impossible.

While we are disappointed by the outcome in Hillsborough County, it is at least a step in the right direction. And it is all the more reason for us to work even harder as we move into Lee County, Florida, to push for a ban there.

This is where we need your help. Please give our investigators and legal team all the resources they need by donating to CAPS today. Together, we’ll keep pushing until every municipality in Florida, and the United States, bans the retail sale of puppies, kittens, and hopefully rabbits.

Frustratingly, Michael Lamprea has opened yet another pet shop in Largo, Florida, called Puppies St. Pete. None of the puppies at this store have Certificates of Veterinary Inspection, either. With your assistance, we can keep the pressure on him and end the senseless suffering of companion animals in pet shops and puppy mills.