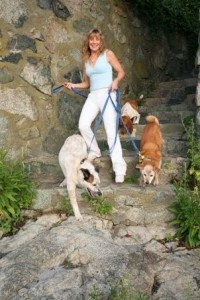 When we bring a dog into our lives, we add a new family member to the household. As we provide food, shelter, and love to our four-legged friends, they reward us in many other ways beside the daily face-licks and warm-welcomes after a long day at work. According to WebMD, pets help lower blood pressure, lessen anxiety, and boost our immunities. But what about weight loss?

During those cold, wet, slippery, winter days, it’s difficult not to give in and stay home with a nice cup of cocoa and a good book to read. Having pooches with every day needs usually prevents the lack of will, making us go out, walk around, and ensure carpets, furniture, walls, and wooden floors remain urine and poop free. What many fail to realize is that by offering your pup a chance to stretch those legs and empty bowels, we get our own exercise routine. The benefits do not include individuals who only take three steps out the door, pray for the dog to quickly relieve itself, and run back inside just in time for *insert talk show or soap opera. It takes more than a leash and a quick bathroom session.

According to the National Pet Obesity Day Study conducted in October 2008, around 44% of dogs and 57% of cats are either overweight or obese. Around 7.2 million dogs are estimated to be obese while 26 million are considered overweight. The study also found that smaller breeds, such as Dachshunds and Yorkshire terriers are more likely to be overweight than their bigger counterparts. Ay, Chihuahua!

The Association for Pet Obesity Prevention estimates that there are around 75 million pet dogs and 88 million pet cats in the US, with 63% of households owning at east one pet (71 million homes). If you compare these statistics with those taken from the National Pet Obesity Day Study, the overweight issue becomes a concerning problem. Besides having a pudgy, lethargic pet, there are serious risk factors, including osteoarthritis, type 2 diabetes, respiratory disorders, hypertension, heart disease, and cancer.

Now lets flip to the human side.

According to the Centers for Disease Control and Prevention, there has been a dramatic increase in obesity nationwide within the past 20 years. The website defines obesity as a body mass index (BMI) of 30 or greater.

Your mom might shrug off the excess pounds as big bones or baby fat (which becomes less likely by the age of 20), but the reality is obesity is a major risk factor for cardiovascular disease, cancer, and type 2 diabetes. According to The Dog Daily, the CDC reports that around 67% of adults are heavier than they should be. Next time your loved one attempts to make you feel better by saying Macy’s clothes run small, give out the facts.

Alas, you don’t need a gym membership or a treadmill. Experts, such as Dr. Robert Kushner, a human obesity expert and professor of medicine at Northwestern University’s Feinberg School of Medicine,state that dogs make great workout partners. According to an article from Medicinet.com, Deborah Wood, an animal shelter manager from Portland, Ore., lost 140 lbs. after going for three-mile walks accompanied by her three papillons. Not only do pups give incentive to unglue yourself from the couch, but they make the workout experience enjoyable. The Taco Bell diet won’t work, folks. The “I love my puppy so much I’ll go for walks to keep him healthy” will.

A study conducted by the Research Center for Human-Animal Interaction at the University of Missouri’s College of Veterinary Medicine revealed that people who walk dogs are more consistent about regular exercise and show more improvement in fitness than those with human walking companions. According to a New York Times blog post, in the ReCHAI study, 35 older adults from a living home were assigned to different walking groups: 23 exercising with human companions and 12 taking a daily bus to a local animal shelter where they were assigned a dog walking companion. The results were impressive:

“Walking speed among the dog walkers increased by 28 percent, compared with just a 4 percent increase among the human walkers.”

The epiphany: a dog will never cancel plans for a walk. They’ll remain energetic and make the calorie-burning experience fun.

If you’re ready to make a New Year’s resolution and take walking your pup seriously, Jennifer Viegas from The Dog Daily has some helpful guidelines to keep in mind:

2.    Your dog should exercise anywhere from 15 to 60 minutes twice daily, depending on its size, breed, age and condition.

5.    Swimming is a fantastic non-joint-stressing exercise for both dogs and humans. Retrievers tend to be at the top of the swimming pack.

6.    Add mental stimulation, such as a hide-and-seek element, into your dog playtime. Border collies and other working breeds need such stimulation to stay happy.

8.    Dogs with short noses, such as bulldogs and Boston terriers, succumb to heat exhaustion more readily, since they cannot cool themselves down like other dogs can. If your dog starts acting woozy, gets a dark red-colored tongue or thick, ropy saliva, stop, move to a shaded area and offer water.

10. Don’t go on long runs or walks with puppies, since their bones are still developing. Dogs can handle longer periods out at the age of 15 months or older.

11. Don’t feed your dog right before or after intense exercise, as this could cause stomach upset or dangerous bloating and/or stomach twisting.

12. Many dogs suffer foot damage after being exposed to cold surfaces during the winter months. Limit time outdoors and also take special care that your dog does not drink from puddles, as they could be contaminated with antifreeze. Small-breed dogs may require a jacket for outdoor activities.