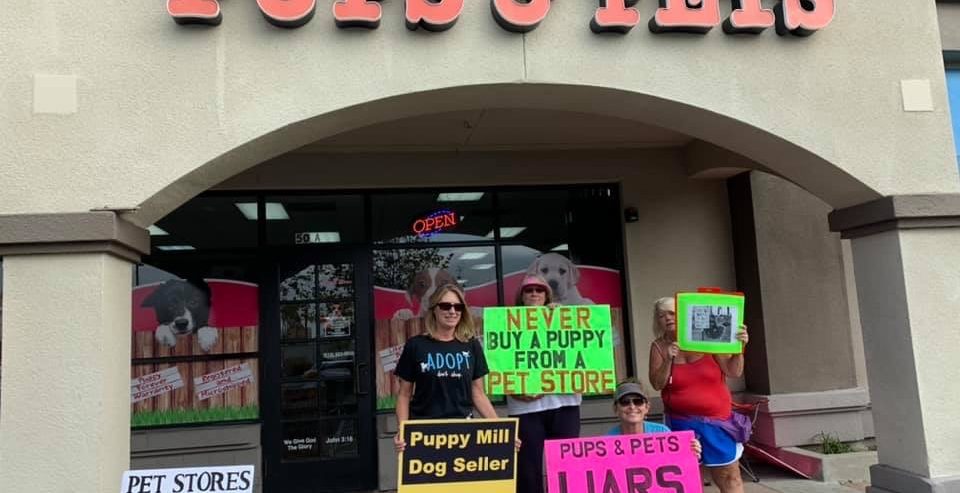 David Salinas has come a long way from selling puppies from the garage of his San Diego home. Today, he has an empire of 10 pet shops: five in Southern California, four in Utah and one in Nevada and is notorious for selling mill-bred puppies from fraudulent rescues to circumvent California’s Pet Rescue and Adoption Act (AB 485).

But we have exciting news to share! Through court-ordered preliminary injunctions and the threat of more lawsuits, Salinas has closed his five California pet shops. In fact, all nine of the remaining California pet shops, which were selling mill-bred puppies from fraudulent rescues, have closed for the same reasons.

Salinas first came to the attention of the Companion Animal Protection Society more than 10 years ago when CAPS began receiving online complaints from buyers in Orange and San Diego Counties in California. These buyers met Salinas at his home, where he was keeping puppies in his garage. Some of these puppies were sick, and at least a half dozen had parvovirus. Canine parvovirus is a highly contagious viral disease of dogs that commonly causes acute, often deadly, gastrointestinal illness in puppies. When some of these buyers demanded to know names of the breeders of their puppies, Salinas either refused or provided phone numbers or addresses for individuals in Southern California who were not breeders, a trick he later used for Beach Buddy Puppies.

Salinas soon sold enough puppies to start San Diego Puppy in a strip mall in 2011. As luck would have it, there was a billboard in the parking lot for San Diego Puppy. To the chagrin of Salinas, CAPS placed Models Against Pet Shops and Puppy Mills public service ads for two months in a row.

CAPS then filed a Motion for Attorney’s Fees under the California Anti-SLAPP (Strategic Lawsuit Against Public Participation) in which we argued that the purpose of the lawsuit was to intimidate CAPS and other organization who had worked on the successful passage of the San Diego ordinance.

On September 11, 2015, a federal judge awarded attorneys’ fees of $16,650 for time and expenses incurred by CAPS’ attorneys and made an additional award to other defendants also sued by Salinas.

In the meantime, Salinas opened pet shops in National City, San Marcos, Oceanside, Corona and Temecula. Oceanside passed an ordinance that required pet shops to use non-commercial breeders with small facilities. When CAPS investigated Beach Buddy Puppies in Oceanside, we obtained names of breeders for every puppy in the store. One was USDA-licensed broker J.A.K.’s Puppies, in Britt, Iowa, which only brokers and does not breed (Salinas still uses J.A.K.’s Puppies). Another was Jason Lee, a front for USDA-licensed Minnesota broker and breeder Wanda Kretzman, who was under investigation by USDA. Jason Lee McDuffee is her son.

Although the addresses for the California breeders were real, our phone calls and visits to homes revealed that the breeders listed on the cage cards did not live at these addresses. One breeder listed was Laurence (spelled Lawrence on the cage card) Zwirn, the CEO of Nature’s Purest and contestant on season two of Millionaire Matchmaker. A CAPS investigator went to the address listed. It was an old location for Nature’s Purest. Zwirn is not a dog breeder. We provided our evidence to the California Attorney General and the City of Oceanside.

CAPS investigated every pet shop in California and some of the breeders and brokers who sold to them, making a documentary that demonstrated the need for retail ban legislation.

We used our investigatory evidence, including our video exposé about David Salinas’ pet shops, in support of The Pet Rescue and Adoption Act (AB 485), which bans the retail sale of dogs, cats, and rabbits and encourages pet shops to showcase these animals from shelter and legitimate rescue organizations. David Salinas and pet shop owner Amilcar Chavez (see below) hired a lobbying firm to fight AB 485, which passed and was signed into law in the fall of 2018.

The Pet Rescue and Adoption Act was enacted on 1/1/19. CAPS investigated all 19 pet shops still open in early 2019. Sixteen of these pet shops were selling mill-bred puppies from Pet Connect Rescue in Joplin, Missouri and Bark Adoptions in Menifee, California. Salinas owned four of the stores: National City Puppy, Broadway Puppies, Hello Puppies and The Fancy Puppy. Bark Adoptions was started by Amilcar Chavez, who owned Bark Boutique in Temecula (later closed because of pressure from animal control) and Bark Avenue (formerly Escondido Pets), which is closed because of a preliminary injunction obtained by CAPS. Bark Adoptions obtained puppies from Rescue Pets Iowa, a fraudulent rescue started by large broker J.A.K.’s Puppies in Britt, Iowa.

CAPS worked with the city attorney for National City to draft an ordinance that closed the loophole in the California law that is allowing pet shops to sell puppies from fraudulent rescues. Salinas sued National City over the ordinance and hired a company to obtain signatures, using fraudulent means, on a petition for a referendum. The referendum lost in a March election, and Salinas dropped his lawsuit.

David Salinas expanded his pet shop empire to Utah and Nevada, where he was also committing consumer fraud. CAPS investigated his four stores in Utah and one in Nevada. The websites for all nine of his pet shops featured fraudulent rescue puppies from Bark Adoptions and Pet Connect. Customers in Utah and Nevada could request “rescue” puppies from the California pet shops. State records show that Salinas transported puppies from California to Utah. CAPS provided evidence to the Utah Department of Commerce, which opened an investigation. Because of this investigation, Salinas recently stopped featuring California “rescue” puppies on the websites for his Utah and Nevada pet shops. The Utah Department of Commerce fined Salinas $5,000 in May but suspended half of that sum contingent upon Salinas complying with the terms of the agreement.

CAPS and San Diego animal lawyer Bryan Pease are working together to sue California pet shops for violations of state and federal laws. The defendants include pet shops, the fraudulent rescues supplying the pet shops, brokers, and the individuals involved with these entities. Some of the customers who filed a complaint on the CAPS website are plaintiffs to the lawsuits. They were duped into believing they were adopting a “rescue” puppy, although they paid thousands of dollars and often used financing. Many of these puppies were already ill or developed medical issue shortly after purchase.

Mr. Pease has obtained preliminary injunctions against Salinas-owned pet shops National City Puppy, Broadway Puppies, Pups & Pets and Chavez-owned Bark Avenue. He has obtained a temporary restraining order against Temecula Puppies. These legal orders means these stores have to close pending the outcome of litigation. Salinas-owned The Fancy Puppy and Hello Puppies, along with Villaggio Family Pets and Town Puppies, chose to close in anticipation of temporary restraining orders and preliminary injunctions.

As a result of CAPS’ investigations and legal efforts, there are now no pet shops selling puppies.

CAPS is part of a coalition, comprised of national nonprofits, San Diego Humane Society, and San Francisco Humane Society, which drafted language to amend The Pet Rescue and Adoption Act to close the loophole that allows pet shops to sell puppies from fraudulent rescues. California AB 2152 would prevent pet shops from having ownership or monetary interest in the animals in their stores. Pet shops would only be allowed to offer space to shelters and rescues to showcase animals for adoption. Adoption fees would not be allowed to exceed $500. The shelters and rescues would not be able to obtain animals from breeders for compensation. AB 2152 passed the assembly and is in the senate.