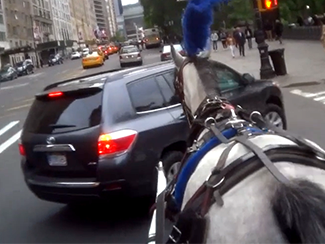 Testimony of John T. Maher Esq. on behalf of the Companion Animal Protection Society, Inc. (CAPS) concerning Proposed Int. No. 573-A before the City Council of the City of New York, City Hall January 22, 2016

Good Afternoon, I am John Maher, General Counsel for the Companion Animal Protection Society (CAPS). I have been an Animal Lawyer for twenty-seven years and have served as an adjunct professor of Animal Law at Touro Law Center. I am also a New York City resident and I have observed carriage horses in New York City and other cities for over forty years.

CAPS views horses as companion animals who must be treated with respect and accorded rights and not used for instrumental purposes, such as pulling carriages for human amusement and vanity. The carriage horses suffer ankle and knee joints swollen and sometimes crippled from continuously stepping on hard asphalt in the heat of August and the freezing rain of winter. CAPS therefore objects to every aspect of Proposed Int. No. 573-A in the strongest possible terms as a sham welfare measure.

Like everything in New York City, this misguided proposed ordinance has an ethically unsound real estate deal at its rotten heart. In this case the proposed modification to section 17-327 of the administrative code of the City of New York seeks to use public funds to enable private cruelty on public land by creating a stable in Central Park. The carriage horse owners apparently get shares of a real estate windfall from the sale of their old facilities, plus a new stable building in Central Park at public expense, all as a result of Proposed Int. No. 573-A. Does NYC really need to spoon feed the carriage horse industry when it claims it can not even afford an animal shelter in every borough? On top of that, the proposed ordinance eviscerates the nascent pedicab industry by restricting such rides and fares to above 86th St where there is essentially no market for them. This favoritism is discriminatory on its face because it is intended to impermissibly favor one special interest group, the carriage horse industry, over another. How low has the New York City Council fallen when it schemes to gut an alternative low-carbon bicycle-based industry in favor of perpetuating and favoring animal abuse?

Were the human corruption at the heart of this ordinance the only consideration, it would just be business as usual before the City Council. Instead, the administration proposal fails to consider the voices and agency of other actors in this baroque chamber piece – the interests of the carriage horses themselves. One look at the hack line on Central Park South will tell you these horses do not want to pull carriages where they suffer swollen joints, are forced to trot on hard surfaces which reflect the force of the repeated pronation of the hooves back and up into the joint, endure the cracked hooves, and the behavioral problem associated with urban stress. The several smaller, thinner saddlebreds among the horses do not want a life of misery pulling heavy carriages intended for draft horses or consign themselves to a life of misery, flies, and freezing rain — it is wrong. This way of life is not what being a horse is supposed to be about. Imagine yourself as homeless and forced to pull a 700 lb. shopping cart tied to your body several miles each and every with a vinyl bag to catch your feces hitting you in the back of the thighs at every step you take. Consider that and you begin to get the idea.

Or better yet try that out yourself for a few days before you vote to pass Proposed Int. No. 573-A.

Why a compromise? The horses do not want mere Zoe, a classical term meaning “bare life,” but deserve Bios, or an inclusive political life as singular individuals with rights. The Missouri Compromise, another example of American law as institutionalizing the structural means of oppression, enabled slavery, was a windfall to slaveowners and denied the slaves personhood and the rights which such accords while keeping their instrumental use as capital intact. Here Proposed Int. No. 573-A, a reform measure backed by an alliance of convenience of Linda Rosenthal, a worthy welfarist, and others not so worthy, serves to enable a continued future for the exploitation of carriage horses within New York City. In intersectional terms, the oppression here is the same as what would have happened if Lincoln had chosen not to sign the Emancipation Proclamation – which is what we need a version of for carriage horses – and instead said the government will pay slave owners $10 million for your old plantation and build them a new one in Central Park at public expense. And as a result a kinder, gentler slavery for horses will flourish with this fool’s Compromise. The Compromise is about human exploitation and ethics, not about the interests of the horses. It is about the triumph of Zoe and exploitation over Bios, a life constructed of kinship and compassion for horses. I say the carriage horses have slaved long and hard enough and deserve their manumission. The better precedent here is the Somerset v. Stuart case where the Court ruled “Let justice be done though the heavens fall”. Do justice today and vote to defeat this coward’s compromise that is Proposed Int. No. 573-A. The only thing which shall fall are the donations connected to carriage industry lobbyists and the ignominy of the City Council.

Please vote against Proposed Int. No. 573-A. The horses choose against it if you recognize that they must be included in the vote.