Los Angeles – The Companion Animal Protection Society has launched an investigation of the San Bernardino department of animal control after a video of an injured dog impounded at the shelter went viral on social media. The animal protection group, a national non-profit that  primarily investigates pet factory cruelty, was alerted to the injured dog by dozens of complaints to their L.A. office. The dog, a female Staffordshire Terrier mix, languished injured, with a piece of nylon rope embedded into a bloody, open wound in her neck for a full six days without receiving any medical treatment, as stipulated by state law. Maria Sanchez, a volunteer who regularly takes pictures of dogs scheduled to be euthanized in order to network them for adoption, took a video and pictures of the dog. The video quickly went viral on Facebook and Twitter igniting an outcry by the Los Angeles animal rights community, calling for immediate action.

CAPS is also investigating an email, intimidating and retaliatory in nature, written by San Bernardino kennel manager Ryan Long to Ms. Sanchez. In his email, Mr. Long claims, falsely, that Ms. Sanchez’s actions had demoralized his staff and torn down the reputation of the department. Mr. Long told Ms. Sanchez that she could not return to perform her service to the death row animals impounded there until other department officials had reviewed the case.

CAPS sent a letter to Mayor Morris and the city council asking for an investigation independent of San Bernardino’s police department, which governs its animal control department. CAPS will also request an audit by the comptroller’s office. CAPS has reviewed documents and eye witness accounts that depict a dysfunctional department  that is not implementing any reasonable plan to lower its dismal euthanasia rates. Animals at San Bernardino’s animal control have allegedly been killed after the shelter had been alerted that a rescue was in place. The current operational  system allows animals to be available to the public for only one day before being killed, which is woefully insufficient. Caps is investigating allegations of the department’s intimidating atmosphere where staff and volunteers are afraid to speak out for fear of retaliation. 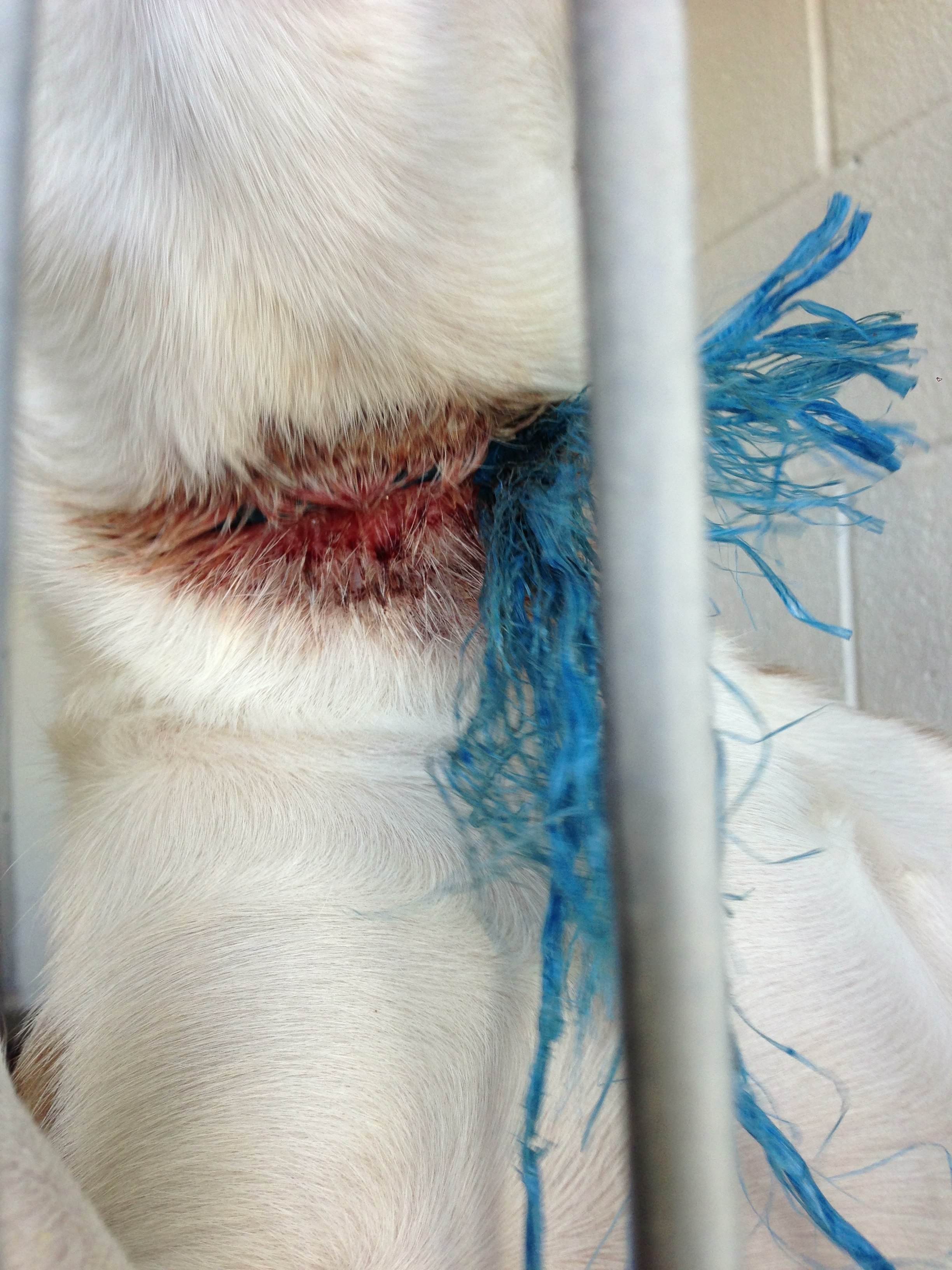 Dear Mayor Morris and members of the city council,

It is with chagrin that I must report to you, on behalf of our national membership, that we received an uncomfortable number of complaints about your department of animal control. Several complaints, serious enough in nature, about employee Ryan Long, involve a dog , ID # ID#A439740, with a nylon rope embedded in her neck. We have begun to examine documents, videos, photos, emails as well as gather eye witness accounts of this incident and other disturbing incidents occurring at the City of San Bernardino’s Department of Animal Control.

The unfortunate dog who had a frayed piece of nylon rope embedded into her neck and whose open wound was left untreated has compelled us, in the interest of the animals we protect, to look more thoroughly into the way that department functions. Unfortunately, this is not an isolated incident.

The dog was left untreated for six days. Though this was not an emergency, the dog needed medical care on day one. An open wound such as the one on that dog could easily become infected, putting the dog’s life at risk.  On intake, this case could have been categorized a neglect/cruelty case. The dog had been tethered with rope, causing serious injury. I would have examined the dog for other, older injuries. (We have requested a forensic veterinary examination of the dog now that she is rescued to look for  older injuries.)  Mr. Long did not have the dog seen by a veterinarian, nor did he remove the embedded piece of nylon rope from the open wound, nor did he give any kind of medical treatment to the dog until the photos went viral on social media. Maybe Mr. Long was not aware that the dog was suffering. However, it is his responsibility as kennel manager to know the condition of every animal in his care.

Mr. Long also sent an inappropriate and intimidating letter to a volunteer, blaming her for “tearing down the shelter staff’s morale and reputation.” He stated in his email that the volunteer’s photos and videos of dogs in need of rescue were “derogatory” and “counterproductive.”  I submit to you that the photos and videos taken by this volunteer depict accurately the status of impounded animals there and furthermore, save lives of animals scheduled to die. Not only does this volunteer help save lives of animals but she (and others who provide the same service) helps reduce the euthanasia statistics of the department and ought to be treated with respect, given encouragement, not punished and intimidated. The reputation of the department and the staff’s morale are the concern of the department chain of command, not hers.

Our review of this case and other cases we will examine is in the context of our national mission. We are the only national non-profit organization in the country that specializes in investigating pet factory cruelty. We work with law enforcement, lawmakers and government agencies on a daily basis and on a national scale. We are trained to identify violations of local regulations, state laws and federal laws and this embedded rope and withholding of medical care incident would be considered a violation of the Animal Welfare Act if this dog had been in a commercial breeding operation. It would have been reported by USDA inspectors and there would have been a citation and an obligatory plan for improvement, with a scheduled re-inspection.

I want to add that I spoke briefly with Sergeant Affrunti about the matter. He minimized the incident and was less than forthcoming about the performance of the department, telling me to file a public records request, which I have done. Sergeant Affrunti claims the rope was a “loose collar” that “was not embedded.” Respectfully, that is untrue.  I am reluctant to press Sergeant Affrunti as I normally would on this and other allegations about the department because of his history with the police department. I am used to dealing with animal control and agriculture bureaucrats and given the Sergeant’s history protecting your city from violent criminals, it is understandable that this incident, in comparison, seems insignificant. But this incident is significant in the milieu of an animal control department.

I was told by the City Manager’s office that there would be an internal investigation.  We hope the investigation will be conducted independently of the police department. We also recommend  an audit by the city’s comptroller. A quick study of the AC department’s statistics reveal that there were 3317 animals euthed  and 1454 adopted in the 2012 July through October stats. Sadly, I found that animals are only seen for one day as “available” to the public. This is woefully insufficient if the department wants to improve its live release rate.  I understand that there are a multitude of serious problems facing the city at this time and am not minimizing the irresponsibility of the public. But there is always a way to improve and lives depend on the will for improvement in that department.   We would like to know if there will be an attempt to improve the performance of the department of animal control and exactly what plan of action will be implemented.