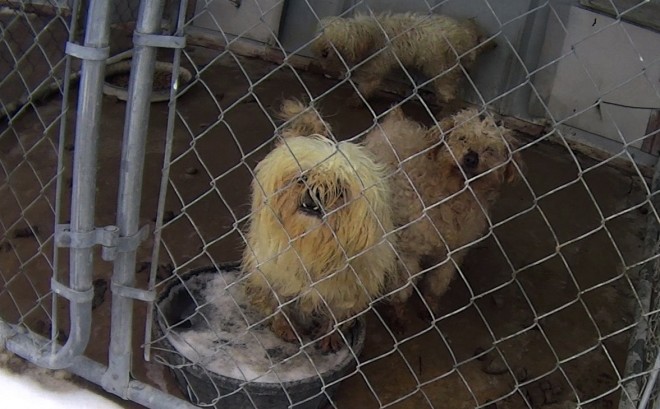 Most readers of this blog know that it’s a bad idea to buy animals at pet shops. Pet shop animals, almost without fail, come from puppy mills. When adding a companion animal to your family, it’s always best to adopt. But now, the pet shop/puppy mill industry is using a deceptive new strategy to trick the public into buying its animals: fraudulent rescues.

As an undercover investigator for CAPS, I’ve been inside over 700 puppy mills, and I’ve worked at dog breeding and brokering facilities. I have also investigated hundreds of pet shops. CAPS uses evidence from these investigations to apply public, legal, and legislative pressures to the breeding industry.

Since 2009, CAPS has been initiating pet shop ordinances in cities and counties across the country to ban the retail sale of animals. The effect of those laws is that they prevent mill-bred animals from being sold in local pet shops. Instead, pet shops are encouraged to offer shelter or rescue animals for adoption.

There are now over 250 pet shop ordinances in the United States and Canada, most of which deprive puppy-and-kitten mills of their access to those markets. In response, some pet shops and mills have begun circumventing the laws by turning to fraudulent rescue organizations like Hobo K-9 Rescue.

Hobo K-9 Rescue is a nonprofit based in Britt, Iowa. It is run by Jolyn Noethe, who also owns J.A.K.’s Puppies, Inc.—a notorious dog brokering facility that sells puppy mill animals to pet shops. CAPS thought it was suspicious that a commercial dog dealer would also start a rescue organization, so they sent me to investigate.

I went to Britt, Iowa, to an address registered for Hobo K-9. The sign on the door made no mention of a dog rescue. Instead, it was a sign for J.A.K.’s Puppies, Inc. When I told the two employees that I was interested in a rescue dog, they became evasive and started responding to my questions with, “You will have to call and talk to Jolyn.”

Legitimate dog rescues are eager to find loving homes for their animals. They hold adoption events and actively promote their cause. The only thing the employees at Hobo K-9 seemed interested in was getting me out the door. There were no apparent facilities for holding animals or providing them with care. The employees didn’t even have a Hobo K-9 business card. It was clear to me that Hobo K-9 Rescue was likely just a front for J.A.K.’s.

J.A.K.’s Puppies, Inc. has been around for years. It is a USDA-licensed puppy brokering facility that buys animals from puppy mills and resells them to pet shops across America. It has acquired puppies from many horrendous mill breeders, including Dennis Van Wyk and Wendie Dettbarn.

Hobo K-9’s inception was more recent. It was formed by Jolyn Noethe in September 2016, likely as a way to circumvent pet shop ordinances. Chicago, which has an ordinance banning the retail sale of dogs, cats, and rabbits, is a prime example. Pet shops there are only allowed to sell those animals if they come from a rescue or a shelter.

But CAPS learned that between September 2017 and January 2018, Hobo K-9 sold over 300 “rescued puppies” to Pet Luv Pet Center in Chicago, evading the law. I went to Pet Luv to investigate. I found signs on many of the animals’ cages, identifying the puppies inside as Hobo K-9 Rescue dogs—even though the dogs were still being sold for almost $2,000 each.

An employee at Pet Luv even acknowledged to me that Hobo K-9’s puppies are all from breeders (not random sources as you would expect from a rescue). CAPS provided this information, and other investigative evidence, to the Chicago Tribune, which just published an extensive report on Hobo K-9.

The Tribune details a specific instance where three puppies from the same litter, obtained from a puppy mill, were split up. One of the dogs was shipped to a pet shop outside Chicago—where there are no ordinances. That puppy was sold under the name J.A.K.’s. The puppy’s two littermates, however, were declared “rescue dogs” and sent to Pet Luv under the name Hobo K-9. These “rescue dogs” were then sold for over $1,000.

The Tribune identified more than two dozen similar cases where puppies of the same breed and birthdate arrived in Illinois on the same day—with one tagged as a commercially bred dog and the other as a rescue. And, so far, all of the dogs sold under the name Hobo K-9 have been either purebreds or designer mixes. And most have been only eight to twelve weeks old. That pattern is beyond unusual for a legitimate animal rescue organization, and it is further evidence of what’s really going on.

Jolyn Noethe, it seems clear, uses the name J.A.K.’s to sell animals to pet shops in areas where there aren’t ordinances to prevent the retail sale of animals. She uses Hobo K-9 in markets where selling animals is illegal. But the dogs all come from the same places. Puppy mills.

Jolyn Noethe also appears to be using the Hobo K-9 brand to sell puppies to pet shops that want to improve their image by offering “rescued” dogs. I went to Escondido Pets in Escondido, California, which is one of those pet shops. Once again, there were designer puppies marked as Hobo K-9 Rescue animals. When I asked about Hobo K-9, I was told it was a rescue that the store partners with to offer up animals for adoption.

The same thing has been happening at the Shake A Paw pet shop in Union, New Jersey, and at the Shake A Paw in Greenbrook, New Jersey. The East Coast Humane Society in Venice, Florida, has also received puppies from Hobo K-9. Jolyn Noethe appears to be sending excess mill puppies there as a way to get rid of them. But the East Coast Humane Society still claims that the puppies are “rescues.”

Hobo K-9 is listed on the IRS’s Tax Exempt Organization Search website as a 501(c)(3) nonprofit, which means it doesn’t have to pay taxes on its income from puppy sales—even though the puppies come from the same commercial breeding facilities as the J.A.K.’s puppies, and they are sold for the same prices.

The worst part is: Hobo K-9 isn’t alone. Fraudulent rescues are popping up all over the country. Their goal is to bypass local laws and trick the public into buying mill-bred animals. But CAPS will continue to investigate them and take every action we can to shut them down.

You can help by sharing this blog on social media to spread awareness of the issue. And you can donate now to CAPS. Your support will fund more undercover investigations like this one.

And most of all, when adopting an animal, be sure to do some quick research to make sure you aren’t accidentally supporting a puppy mill. Most legitimate rescues and shelters are active on the internet, they hold in-store adoption events, and they are usually local.

For more information, be sure to subscribe to the CAPS newsletter. You can also watch a video of the Hobo K-9 investigation here.