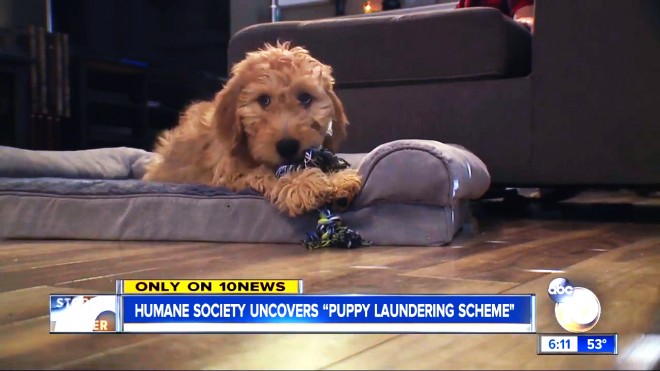 Two months ago, CAPS received disturbing news. A woman named Adrianna notified us about a Goldendoodle puppy, Fozzie, that she had purchased from Broadway Puppies in Escondido, California. Adrianna soon discovered that he was ten pounds underweight and suffering from diarrhea. According to her veterinarian, Fozzie likely came from a puppy mill.

The news that a pet shop puppy came from a mill isn’t surprising. Sadly, it’s not even news. Almost all pet shop animals come from mills. What’s newsworthy about Fozzie’s story is where Adrianna purchased him. Fozzie came from a supposed retail adoption center.

On January 1, 2019, the Pet Rescue and Adoption Act, which bans the sale of dogs, cats, and rabbits in pet shops, went into effect in California. The law’s goal is to keep mill animals out of pet shops and to increase the adoption rate of the animals that really need homes: those in shelters and with rescue organizations. California pet shops can now only offer these animals if they come from animal shelters or 501(c)(3) rescues. In 2017, CAPS provided lawmakers with extensive evidence and testimony critical to the law’s passage:

Prior to the new law, there were thirty-two pet shops in California. CAPS investigators went to all of them and traced their animals back to puppy and kitten mills. Now, there are nineteen pet shops remaining. CAPS went undercover to see if these shops were complying with the new law. One of those pet shops was Broadway Puppies, the store that had sold Fozzie.

To the average consumer, Broadway Puppies might appear to be a retail adoption center; the store had a dozen animals up for adoption, sourced from two animal rescues: Bark Adoptions and Pet Connect. However, to the undercover CAPS investigator, there were red flags.

The dogs were all purebred or designer hybrid puppies, eight to sixteen weeks old, selling for between a thousand and six thousand dollars. The dogs were also being sold with health warranties and high financing options. Broadway Puppies, it became clear, was conducting business exactly as it had before January 1st. We suspected that its animals were coming from mills. The next part of our investigation confirmed it.

At three of California’s remaining pet shops, our investigators found them to be blatantly violating the new law, openly selling dogs from local breeders. We turned those stores over to the authorities. The other sixteen pet shops all claimed that their puppies were “rescue animals” from one of two rescues: Bark Adoptions or Pet Connect.

Bark Adoptions is based in Menifee, California, but it gets its dogs from Rescue Pets Iowa in Ottumwa, Iowa. CAPS uncovered that the person behind Rescue Pets Iowa is Jolyn Noethe. If that name sounds familiar, it’s because she’s a puppy mill broker we exposed last year for her fraudulent animal rescue, Hobo K-9 Rescue, which was selling puppy mill dogs to pet shops, including three in California. Because of an Iowa Attorney General investigation of Hobo K-9, initiated by CAPS, and because of exposure by The Dodo of our investigation, Noethe started Rescue Pets Iowa under another person’s name. She then began using Bark Adoptions as a pass through to sell mill-bred puppies to California pet shops.

Pet Connect, a fraudulent rescue in Joplin, Missouri, is run by Ray and Alysia Rothman. The Rothmans also own a Connecticut pet shop that gets puppies from the Hunte Corporation. Hunte is one of the largest puppy mill brokers in the country and where Ray Rothman also conveniently works as a sales manager. We suspect that Pet Connect’s “rescue dogs” are actually mill animals coming from the Hunte Corporation.

Both of these fraudulent rescues have been passing off mill-bred puppies to unsuspecting California consumers. And the pet shops that have been partnering with these “rescues” have been fully complicit in this deception.

CAPS has been working with animal control agencies around the state to crack down on violators. Animal Friends of the Valleys, which has jurisdiction over the five supposed retail adoption centers in Temecula, CA, issued sixty citations at $500 each. Animal controls, however, can only issue citations or warnings to pet shops that are using rescues without 501(c)(3) status, or that are missing cage cards with the names and locations of their rescues. Therefore, CAPS has been turning over evidence to and working closely with attorneys general in California, Iowa, and Missouri.

Adrianna thought she was lucky when she found Fozzie. She’d been looking for a rescue animal for her autistic son. When they bonded at the store, the pet shop utilized a series of manipulative sales tactics. “Fozzie won’t last long,” they told her. “Look at how your son loves him. Don’t worry, we offer financing to help.” When the dust settled, Adrianna was stuck owing $8,500 (financed at a rate of nearly 65 percent) for a sick puppy mill dog.

A CBS Los Angeles story will air in May.

CAPS is calling on legislators to amend the Pet Rescue and Adoption Act to close the loophole that is allowing this consumer fraud and deception at pet shops. Other states, with whom CAPS is working, are considering similar legislation, and they will be using California’s law as an example. Massachusetts has followed our advice and worded their legislation so that pet shops will receive no adoption fees and have no monetary or ownership interest in the dogs, cats, or rabbits they will be offering.