LISLE, IL, February 2, 2013 – Local pet shop Puppy Parlor advertises on their website huge store-wide sales but they exclude puppies. They find other ways to entice buyers with already low prices on dogs. The problem: selling pets from puppy mills might be a cost cutting move, but it comes with a high collateral price.

Companion Animal Protection Society (CAPS) decided to protest Puppy Parlor after it obtained proof the pet shop purchased dogs from unscrupulous breeders. These inhumane mills, mostly from the Midwest, mass breed dogs by the hundreds, cramming them inside filthy cages and providing inadequate veterinary care if any.

Prairie Lane Kennel, operated by Dennis and Donna Van Wyk, expose their dogs to the elements in rickety outdoor pens covered with feces. CAPS has investigated the Van Wyk’s mill several times over the years and the conditions these dogs live in are not only appalling but in violation of the Animal Welfare Act (AWA). USDA inspections show that they repeatedly fail to keep their facilities free of rust and clean – not to mention the lack of veterinary care. CAPS footage appears in the Dateline report “A Dog’s Life” from 2000, which won a Genesis award.

Puppy Parlor obtains their dogs from several places, including the Van Wyks. They might argue that one bad breeder doesn’t mean they get all their pups from mills, unfortunately, the Van Wyks are not the exception but the norm. They use two brokers, J.A.K.’s Puppies and Oleo Acres, notorious for using puppy mills as their suppliers. To make matters worse, according to the Chicago Tribune, the drivers from Oleo Acres, operated by Patti Noethe, were arrested for animal cruelty in 2012.

Doug and Wendy Dettbarn, one of J.A.K.’s suppliers, have several repeat violations and damning USDA inspection photos. The pictures reveal dogs with green, crusty gunk around the eyes, engorged growths, and severe matting. In some cases, the mothers developed huge masses on their mammary glands from the constant breeding. One of Dettbarn/J.A.K.’s dogs was a sick purchase for the lead plaintiff in a class action lawsuit against Happiness Is Pets, another one of CAPS campaigns.

“What is going on in that back room?” asks Ida McCarthy, CAPS Chicago Campaign Coordinator. “Show the public the back room.” According to Illinois Department of Agriculture statistics, the pet shop at one time had up to 50 puppies in their small suburban strip mall location. These dogs are stuffed in an area out of sight from the public, presumably in a place that would otherwise be a storeroom. For Puppy Parlor it is not enough to buy from these cruel places, they also seem eager to join the commercial breeding ranks.

CAPS will hold regular peaceful protests to urge Puppy Parlor to go humane and stop their backroom breeding. After numerous consumer complaints and concrete evidence of their support of the puppy mill cycle, the store refuses to change their ways. With support from the community, CAPS will engage the potential customers and educate them about the harsh realities behind the puppy in the window. 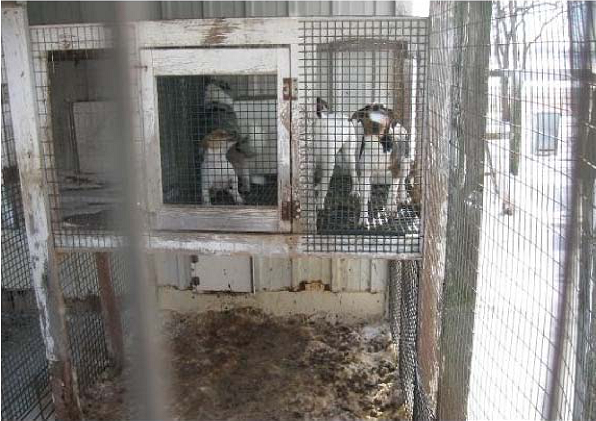 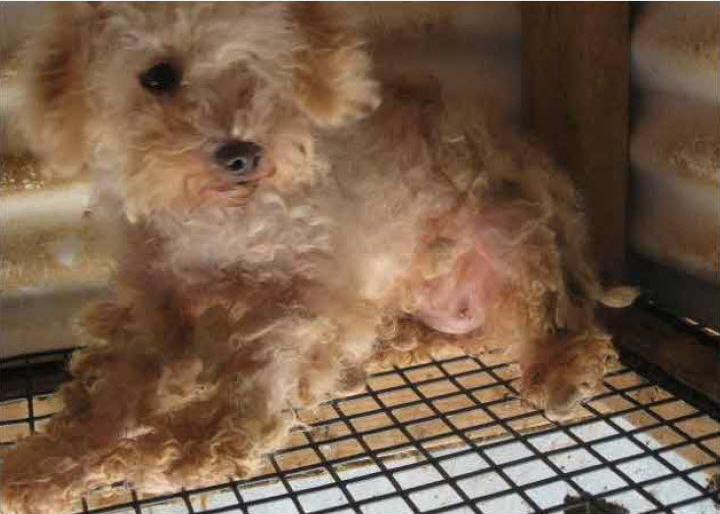 Picture of a dog at Doug and Wendie Dettbarn’s puppy mill from USDA inspection.