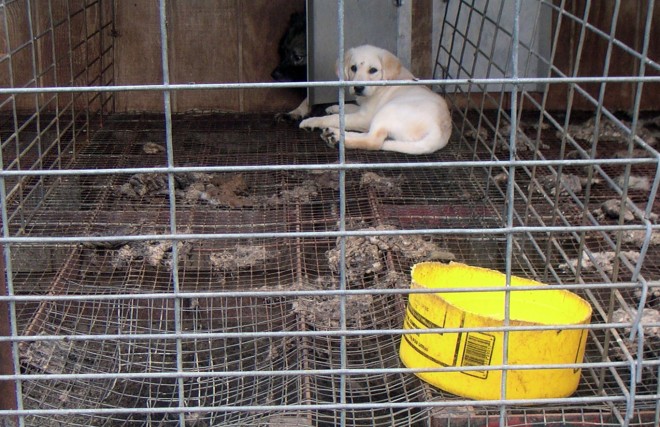 On July 17, 2017, the California Senate’s Business, Professions, and Economic Development Committee voted 7-1 in favor of California Assembly Bill 485. That’s a mouthful, we know, but the importance of this vote can’t be overstated. The bill, which already passed the State Assembly, now moves to the full Senate. If it passes, and is signed by Governor Brown, California will become the first state in the country to ban the retail sale of puppies, kittens, and rabbits.

This would be a major victory in the fight against puppy and kitten mills.

As you may know, CAPS has been working for years to spread puppy mill awareness in major pet shop markets, such as California. Part of this effort has centered around our protests and our campaigns to convert pet shops into humane pet adoption centers. But our main focus has been on passing local ordinance laws to ban the retail sale of animals.

We began in West Hollywood, then moved onto larger cities like Los Angeles and San Diego. This kicked off an ordinance movement in over 230 municipalities in the United States and Canada where the retail sale of puppies and kittens (and in some cases, rabbits) have now been banned. These bans have saved lives by encouraging pet shops to offer shelter and rescue animals for adoption instead of selling mill animals. They also helped lay the groundwork for Assembly Bill 485.

There is no doubt that these laws have had an impact in California. Barkworks, a major pet shop chain in Southern California, has shrunk from seven locations to three.

Barkworks has the worst alleged consumer fraud that CAPS has encountered during our investigations of California pet shops. The chain routinely misleads customers about the sources of its animals. In some cases, it has even flat out refused to divulge the identity of its breeders, which is a violation of California law.

But Barkworks isn’t alone. Our investigations have shown that most pets shops deceive consumers when it comes to the sources of the animals being sold. This is because almost all pet shop puppies come from puppy mills, and the stores don’t want customers to discover this. Pet shops often claim that their animals come only from “USDA-licensed breeders,” but as CAPS has proven over-and-over, most USDA-licensed breeding facilities are in fact puppy mills.

This is why Assembly Bill 485 is so important. While the piecemeal process of going town to town has taken a huge bite out of the puppy mill market in California, it has also led to a game of whack-a-mole. When a town or municipality bans the sale of animals, some pet shops will relocate to a nearby town where it’s still legal. That’s what one California pet shop owner named David Salinas has been doing for years. He initially sold puppies in San Diego, but he’s had three stores shuttered due to retail ban ordinances. So, he has opened four other stores in California to replace them.

As the above video shows, David Salinas sells puppy mill dogs, despite what he tells his customers. The only way to completely rid California of deceitful practices like this is to pass a statewide ban. The repercussions of a ban will be felt well beyond the California borders. By denying puppy mill breeders a major market like California, it will force many of them out of business. And if more states follow California’s lead, passing statewide bans, it might be a crippling blow to mills everywhere.

CAPS President Deborah Howard provided extensive testimony and investigative evidence in support of California AB 485. CAPS has also conducted undercover investigations of all the pet shops in the state that sell puppies and kittens, as well as many of the USDA-licensed breeders and brokers who supply these shops. We are hopeful that this evidence will help persuade the California Senate to vote in favor of the bill.

If you are a California resident, you can help by contacting your state senator and letting them know that you support AB 485. You can look up your senator by entering your address at this link:

When consumers buy puppies and kittens from pet shops, they condemn the parents of those animals to inhumane treatment in mills. By its very nature, the pet shop and puppy mill industry creates an endless cycle of animal overpopulation, mistreatment, and consumer deceit, causing needless shelter euthanasia and costing defrauded consumers millions of dollars each year. AB 485 is a monumental step in the direction of a world without puppy mills. With your support, we can push it over the finish line.

UPDATE
On September 12, 2017, the California Senate passed the Pet Rescue & Adoption Act (AB 485) by a vote of 38-0! It now goes briefly back to the Assembly for a vote on amendments, then the bill goes to Governor Jerry Brown. If the governor signs the bill, it will ban the retail sale of puppies, kittens, and rabbits in California.

As the only nonprofit organization investigating inside California pet shops and the mills that supply them, CAPS has spent years laying the groundwork for this moment. We also provided extensive testimony to the California Senate in support of the bill. Now we need your help to push it over the finish line! If you live in California, please contact the governor to let him know you support AB 485 and would like him to sign it.

You can email the governor here: https://govapps.gov.ca.gov/gov39mail/

If AB 485 becomes law, pet shops in California will only be allowed to offer puppies, kittens, and rabbits that come from local shelters and rescues. The law will also set an example for other states to follow. This is a monumental step in the fight against puppy and kitten mills.

UPDATE
On October 13, 2017, California Governor Jerry Brown signed Assembly Bill 485 into law! This means that, starting January 1st, 2019, pet shops in California will only be allowed to offer puppies, kittens, and rabbits if the animals come from local shelters and rescues.

This law will drastically reduce the number of puppy mill animals coming into California, and it will eliminate a massive and profitable market for puppy mills in other states that ship animals to California. The law also sets an example for other states to follow. CAPS is already working with officials in New York and Massachusetts to get similar legislation passed.

Thank you to everyone who helped by contacting the California Legislature and Governor Jerry Brown. This is a monumental step in the fight against puppy and kitten mills!