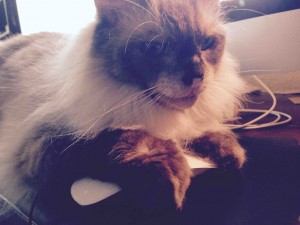 St. Ives, the patron saint of lawyers is represented as accompanied by a cat. And here again, if it were necessary, we might invoke symbolism to explain the simple truth that holy men as well as devils found the cat the most attractive of animals. The profound wisdom, the concealed claws, the stealthy approach, and the final spring, all seem to typify the superior attorney. We should not be astonished, therefore, that Cardinal Wolsey placed his cat by his side while acting in his judicial capacity as Lord Chancellor.

The first thought which comes to mind when people think of CAPS is often the anti-puppy mill work in which CAPS is preeminent. Sometimes one must pause for a moment and reflect that the important work done by CAPS concerns all companion animals and not just puppies. A constant reminder of the importance of cats to CAPS’ work is found in Diana Jarvis, a notorious cat lover, who has been invaluable as part of the CAPS’ legal team. Diana, who resides in New York City, recently lost her two longtime rescued cats to illness and age but has since opened her heart and home to a Siamese previously used for breeding litters of kittens for commercial sale, as well as a visiting stray cat.

Diana, who has worked on the Cook County, Illinois and New York City ordinance lawsuit cases, provides a feline perspective to a traditionally dog centered view of legislative and litigation matters, as shown in the photo of her cat at her laptop.

Aside from scrutinizing draft laws carefully to ensure they cover restrictions on retail kitten sales, Jarvis pounces on legal issues and dissects them as a cat would a mouse. Her recent work involved writing and editing much of the CAPS amicus curiae brief in the New York City “pushback” lawsuit filed in federal court in Brooklyn by the ironically-named trade group, New York Pet Welfare Association (NYPWA). The CAPS brief eviscerates the trade group’s constitutional challenge to the city’s ordinance under the Equal Protection clause.

Jarvis’ writings are aimed at protecting both puppies and kittens, who are covered under the NYC ordinance, from the abysmal conditions of industrial production in puppy mills and commercial catteries. We at CAPS are grateful for her outstanding work. Sometimes it takes a cat person to help CAPS accomplish its mission, especially when our general counsel is a notorious dog person (four rescued Pit Bulls and a Chihuahua) and easily distracted by bouncing tennis balls. CAPS President Deborah Howard, also a lawyer, favors cats and dogs equally, although at the CAPS headquarters, dogs currently outnumber cats, with four dogs and two cats – all rescues.