Thanks to our generous donors, CAPS led the charge in 2019 against pet shops and puppy mills. Our investigators went undercover into 65 pet shops across the country, documenting evidence of deceptive practices and consumer fraud. We recorded hours of undercover video at puppy mills. CAPS also advanced legislation in California, New York, Massachusetts, and elsewhere. And in May, we went public with our five-year New York pet shop investigation, releasing a video unlike any that’s ever been produced. These efforts and victories, made possible by your support, are just a sample of what CAPS has accomplished this year. Keep reading to learn more about the powerful achievements your donations have been generating.

We are excited to tell you about a new, must-read book, written by the lead investigator at CAPS. “Pete,” as you may know him, has spent 16 years working for CAPS, going undercover into hundreds of pet shops and puppy mills. He has witnessed, first-hand, the heartbreaking and inhumane way that the pet shop/puppy mill industry treats its “breeding stock.” Rescue Dogs is a book that cogently explains the reality of commercial dog breeding, encapsulated by the stories of some of the extraordinary mill-dogs rescued by Pete. The book also acts as a comprehensive manual for how to train rescue animals and welcome them into a loving home. And it gives detailed information on how the public can make a difference.

And if you should happen to buy Rescue Dogs on Amazon, be sure to activate Amazon Smile on your account and select CAPS as your charitable organization of choice. Amazon will then donate a percentage of this and every other purchase you make on Amazon to CAPS.

For five years, CAPS has been conducting a large-scale investigation of New York pet shops. We went undercover into over 100 pet shops (many of them multiple times), and we investigated dozens of the puppy mills and kitten mills that supply them. A comprehensive project like this, penetrating the country’s largest pet shop market and its supply chain, had never been attempted before—by anyone—until now. On May 7, 2019, CAPS went public with our results.

Our detailed collection of evidence exposed widespread, chronic consumer fraud in New York pet shops, and it revealed the true sources of the puppies and kittens being sold there. This evidence has already been having an enormous impact. CAPS is working closely with New York legislators to pass a state law that would ban the retail sale of dogs, cats, and rabbits. We also released a documentary to the public, explaining the disturbing results of our investigation.

On January 1, 2019, the Pet Rescue and Adoption Act (AB 485), which bans the sale of dogs, cats, and rabbits at California pet shops, went into effect. Pet shops in California can now only offer these animals if they come from animal shelters or 501(c)(3) rescues. However, a CAPS investigation revealed that 16 California pet shops are still selling mill-bred puppies, obtaining them through fraudulent rescue organizations—fronts for USDA-licensed dog brokers. A loophole in the new law is allowing this to happen.

CAPS immediately began an ongoing investigation of the fraudulent rescues and of the mills that are selling to them. CAP President Deborah Howard was also in California earlier this year, gathering evidence and doing interviews for ABC San Diego, CBS Los Angeles, and NBC San Luis Obispo/Santa Barbara to spread awareness. We sent our evidence to California State Assemblymember Patrick O’Donnell, the sponsor of AB 485, requesting that the law be amended.

As an example of how the California loophole can be corrected, CAPS worked closely with the city attorney for National City, California, on an ordinance that prohibits the sale of pet shop puppies from fraudulent rescues. National City has two pet shops that had been taking advantage of the loophole to sell mill-bred puppies. The city attorney followed our recommendations on how to craft the language of their ordinance, based on pet shop legislation that CAPS is behind in Massachusetts.

Until a state law is amended, CAPS will be reaching out to the other California municipalities where pet shops have been selling fake rescue puppies—Corona, Temecula, Escondido, and Santee—to prevail upon them to adopt similar ordinances.

CAPS is also pursuing a statewide pet shop law in Massachusetts. We investigated all ten pet shops selling puppies and kittens and the mills selling to them. In order to prevent a “fake rescue loophole,” like in California, we urged Senator Patrick O’Connor, the bill’s sponsor, to use stricter language. Massachusetts S.175 states that pet shops cannot have a monetary or ownership interest in the animals, and they cannot benefit financially from adoption fees. CAPS also persuaded Senator O’Connor to add rabbits to the bill. We submitted in-depth written testimony and extensive evidence to the Joint Committee on Consumer Protection and Professional Licensure, which will vote on the bill soon.

With more than 100 municipal ordinances, New Jersey has more laws banning the retail sale of dogs and cats than any other state. However, 22 of the state’s pet shops still sell puppies and kittens. In 2019, CAPS investigators went to all of these pet shops. We have also been investigating the puppy and kitten mills that sell to these pet shops. CAPS will use this evidence to create a video exposé that will educate the public and push for the passage of statewide legislation to ban the retail sale of dogs, cats, and rabbits.

Florida is the nation’s second-largest pet shop market (after New York). CAPS has investigated three dozen pet shops in Orlando, Ft. Myers, and Miami-Dade County, gathering evidence of consumer fraud. In 2019, we also investigated Petland stores in Manatee County. CAPS is currently investigating puppy mills in the Midwest that supply Florida pet shops with animals. We plan to use this evidence to create video exposés—one for each of the aforementioned regions of the state. These will provide crucial evidence for our legislative efforts.

CAPS continues to hold weekly protests at pet shops in the Chicago area. Most of the time, no puppy sales take place while we protest. In addition, this year CAPS provided the Illinois Attorney General with evidence from our investigation of three Chicago pet shops that have been selling fraudulent “rescue puppies” to circumvent the city’s ordinance. The Attorney General is also using evidence from CAPS to investigate a pet shop in Lombard that falsely claims that some of its puppies are from rescues—but are in fact from an Iowa broker, the same one who created fraudulent rescues to sell puppies to California shops. 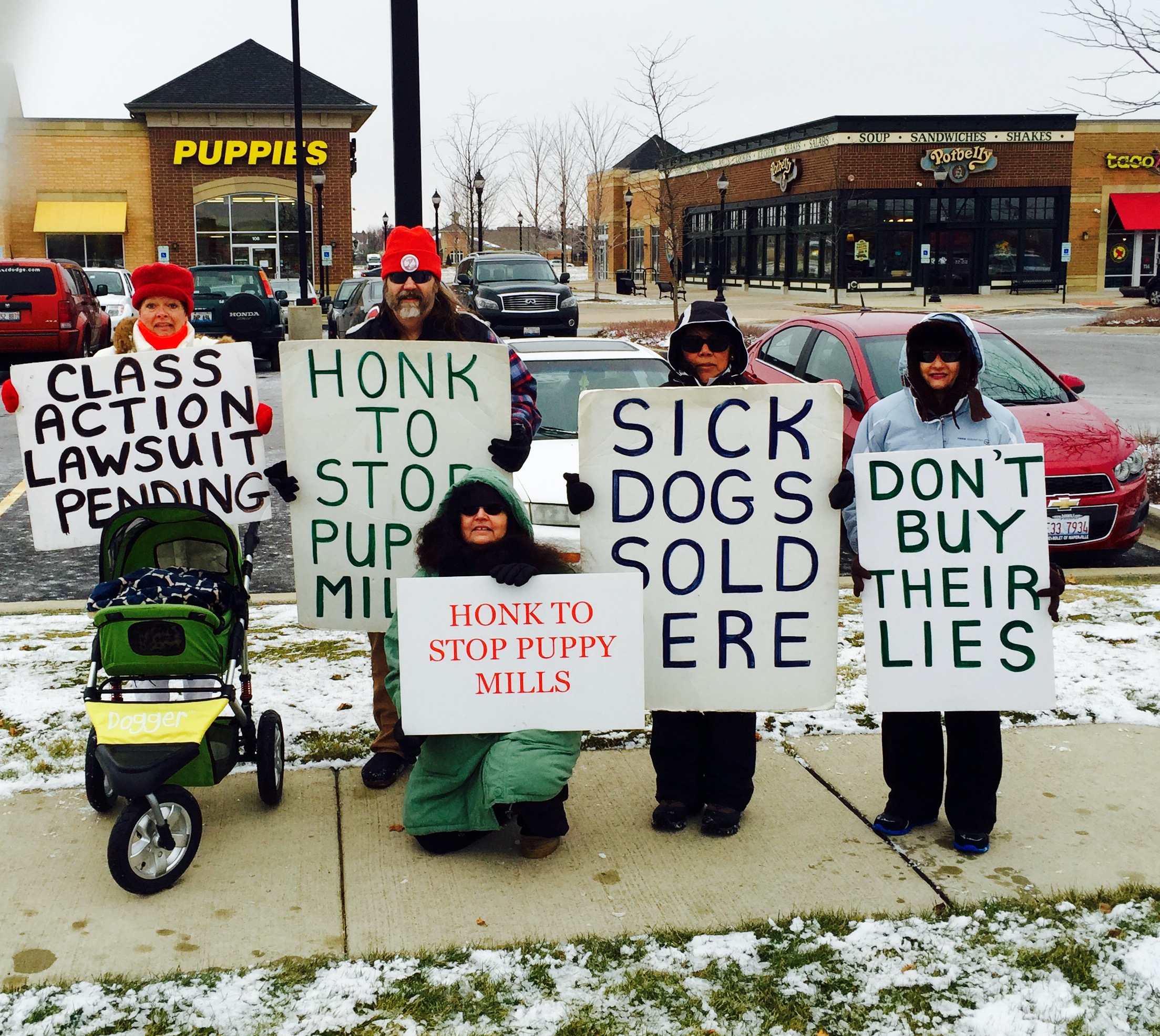 In Connecticut, CAPS investigators went undercover into twelve pet shops in 2019. One of these pet shops (now closed) was owned by the same people in Missouri who created a fraudulent rescue to sell puppies to California shops. Next year, we will produce a video exposé—the first video that a nonprofit has released about the state’s pet shops. This video will combine video from our pet shop investigations with footage from our undercover mill investigations. CAPS will use this video, as well as the evidence we have collected, to support state legislation that would ban the sale of dogs, cats, and rabbits.

As already mentioned, much of the work that was done by CAPS in 2019—gathering hard-to-find but crucial evidence at pet shops and puppy mills—was carried out in preparation for the major actions we will be launching in 2020. CAPS, as the nonprofit that pioneered the ordinance movement, is pouring all of our expertise and resources into a region-by-region and state-by-state effort to ban the retail sale of animals across the United States. The key to passing these laws is evidence.

Legislators need to see irrefutable proof of what’s going on. Otherwise, it’s too easy for the animal mill lobby to muddy the argument and kill the legislation. This is why the thoroughness of our investigations is so critical.

How You Can Help

Donate: None of our nationwide efforts would succeed without the committed support of our donors. Please donate today. Millions of companion animals are currently suffering in inhumane breeding conditions. With your assistance, we can make real changes and prevent the suffering of companion animals.

Get Involved with Legislation: If you live in states or municipalities with pet shop legislation, contact your legislators to express the necessity of banning the retail sale of dogs, cats, and rabbits. Contact CAPS for assistance in introducing a pet shop ordinance in your city, town or county.

Report Pet Shops and Fraudulent Rescues: If you know of a new California pet shop that is selling puppies from fraudulent rescues, please let us know. Please inform us of shelters and rescues that are offering young puppies you believe come from puppy mills.